By FRIEDRICH KUNZMANN
January 8, 2020
Sign in to view read count 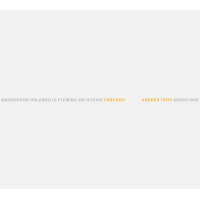 Guitarist Andres Thor leaves little to be desired on his new recording Paradox. Featuring an all-star cast of New Yorkers Orlando le Fleming and Ari Hoenig, as well as Icelandic compatriot Agnar Mar Magnusson, Thor delivers a quiet set of original material which finds a quartet cautiously feeling its way through the changes. The guitar's smooth tone blends into the compositional frames with ease, and the accompanying instruments follow suit.

Climactic moments and special tensions aren't born out of an increase in pace or display of virtuoso on this album. Rather than relying on tricks, the Icelandic guitarist lets the intensity of the respective compositional arcs speak for itself. Rhythms alter almost seamlessly from song to song, due to the dynamic and modest accompaniment by bass and drums. Heonig's playing is rarely this reserved and his omission of the occasional 8th on hi-hat or cymbals speaks volumes. A special synthesis between the sparse piano lines and the sharp runs on guitar characterizes the first couple of tunes. "Eden"'s harmonic progressions are deliberate yet prudently executed through careful conversations between piano and guitar.

The guitar is a clear protagonist and lyrically solos through the tunes. From attentive and watchful, through slightly contemplative ("Avi") to seductively bluesy ("Quantum") and finally sarcastic ("Schrödigner's Cat"), Andrés Thor is able to capture feelings, sensations or moods with precision and sophistication. One of the more extroverted exhibitions on the record, the rocky "Schrödinger's Cat" demonstrates each member of the quartet coming out of their shell with rare drive —the scarcity of such moments may be the only criticism this elegant collection of songs will get.

Thor rarely comps on Paradox. He seems very aware of the quality of the musicians surrounding him and leaves plenty of space for them to do their own thing. "Under the Stars" and "J.L." showcase this quality and place the focus on formidable interplay between the rhythm section and Magnusson's piano soloing, which, similar to Thor's approach, is defined by prudence and deliberate sidesteps, rather than big gestures. A fine quartet recording capturing focused guitar playing and humble accompaniment.