By JEROME WILSON
January 8, 2020
Sign in to view read count 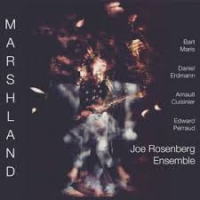 Soprano saxophonist Joe Rosenberg seems to try out a new configuration of his Ensemble every time he records. On his previous release, Tomorrow Never Knows (Quark, 2017) he led a quintet with cello and piano in the front line. On this new effort, he changes to a three-horn format with trumpeter Bart Maris and tenor/soprano saxophonist Daniel Erdmann joining in, along with the holdover rhythm section of bassist Arnault Cuisinier and drummer Edward Perraud.

The group's music goes in several different directions on this album. "La Danse" starts as a slow, massed drone, with Maris emerging as the lead voice, then abruptly changes into a hard-blowing romp where the horns wail over furious walking bass. "Long and Short of it" sounds like a Philip Glass composition in slow motion, an experiment in minimalism with the group repeating flattened patterns of pulsing notes, and individual instruments briefly coming into focus with brief soliloquies. "Funazushi" begins with Rosenberg's soprano wriggling out of a field of spaced bass plucks and percussive slaps. Then Maris and Erdmann seep into the mix, creating a rowdy group tension. Maris' squealing trumpet stands out as it squabbles with the saxophones while the tempo increases.

A second "La Danse" features Rosenberg and Erdmann weaving high, frenzied soprano lines together with minimal support from the rest of the quintet. "Amelia" starts with Rosenberg's melodic ambles over Cuisinier's and Perraud's tumbling backdrop, and coalesces into a more conventional romantic ballad when the rest of the group join in. There are three different pieces called "Marshland" which together sound like they could have been Third Stream experiments by a composer such as Jimmy Giuffre. The first is a rippling confluence of trumpet, tenor and soprano lines. The second is a rattling and thumping duet for bass and drums. The third brings the entire quintet together for a strong climax to the CD, as the horns dart around each other, playing shrill harmonies over a free-falling rhythmic background.

Rosenberg's compositions here sound fresh and constantly surprising, and his group is up to the challenge of performing them. The horn parts are played with finesse, power and humor, and the rhythm section, particularly Arnault Cusinier, does a great job of keeping the music grounded. This is another stimulating and intelligent effort from a saxophonist with a restless and adventurous spirit.