By HRAYR ATTARIAN
January 8, 2020
Sign in to view read count 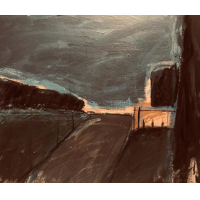 Uruguayan guitarist Santiago Bogacz and his compatriot, bassist Antonino Restuccia, have been performing improvised music individually for about a decade, and playing together for a couple of years. They have released two captivating live EPs, Ducón (Self Produced, 2018) and Subsuelo (Self Produced, 2019). Resonancias is their third collaborative album and the first full length one. Similar to the previous two, it was recorded in one take at a concert that, instead of their hometown of Montevideo, took place in Koln Germany.

Although the recording is divided into 12 tracks, with Roman Numeral titles, the music is continuous and created on the spot during the performance. The ideas expressed on the two previous and shorter dates are expanded here and more fully realized. At times Bogacz strums dense, Latin-tinged chords that resonate against Restuccia's wistfully lyrical extemporization. During other moments Restuccia's muscular and percussive refrains buoy Bogacz' folkish melodies.

The exchanges between the two artists are seamlessly fluid and delightful in their synergy. Whether engaged in a conversation or constructing mesmerizing soundscapes with their overlapping improvisations, Bogacz and Restuccia appear to anticipate one another with confidence and alacrity. So much so that when they are melding their individual, stream-of-consciousness, spontaneous monologues they sound as a single polyphonic entity.

When they take turns soloing they showcase their virtuosity and prowess on their respective instruments. Bogacz bends notes and produces eerie, chantlike, phrases while Restuccia coaxes out of his strings a yearning and melancholic song with breathtaking agility.

Both musicians are well adept in utilizing silent pauses between them. The result is an introspective and somber ambience. Indeed the whole set has a darkly hued tension, though one that is occasionally filled with a serene zen spirituality. Additionally, the record closes on a hopeful tone.

The contemplative and stimulating Resonancias is a mature work that is the culmination of two like minded musicians immersed in creative explorations. And where will they go from here. If their future projects are as original and as thoughtful as Resonancias, then Bogacz and Restuccia are at the threshold of brilliant careers.

About Antonino Restuccia and Santiago Bogacz