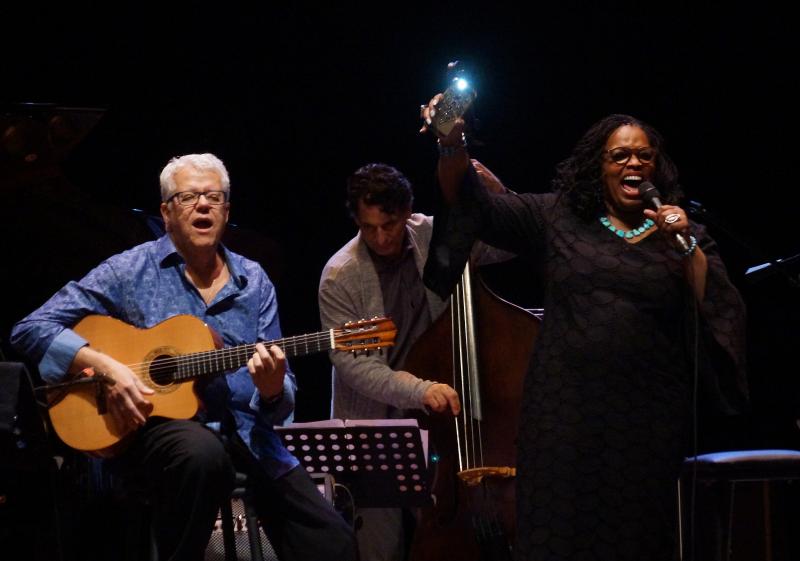 By MARK HOLSTON
February 21, 2017
Sign in to view read count

The Panama Jazz Festival has evolved into the perfect model of an event that places equal emphasis on performance and education.

In terms of the number of marquee musicians it features over the course of five days, the annual Panama Jazz Festival is far from being in the big leagues of similar events in Latin American. That, however, only tells part of the story. Where the PJF stands head-and-shoulders above most music festivals is in terms of the emphasis it places on education, offering dozens of clinics and lectures that cover a wide range of interests. And it may be the only such event on earth to boast a companion symposium on music therapy. Being conducted in the Republic of Panama also has some distinct benefits, from near perfect tropical weather to local culinary treats and the nearby availability of such world class tourist attractions as truly amazing Panama Canal and Panama City's historic colonial zone, Casco Viejo.

This year, the 14th edition of the festival founded by native son and renowned pianist and educator Danilo Pérez featured a handful of internationally noted jazz artists who proved to be a perfect fit for the event's relaxed attitude. Singer Dianne Reeves was showcased in an intimate duo setting with Brazilian guitarist Romero Lubambo, reprising an inviting format they've perfected in over two decades of working together. Their set was a model of unforced virtuosity with audience-pleasing personal touches. Esperanza Spalding more than lived up to the high expectations that accompany her where ever she performs, demonstrating her dexterity as a bassist and flirtatious and technically impressive singing and scatting. Drummer Terri Lyne Carrington popped up in a supporting role at a number of concerts, while drummer Brian Blade and bassist John Patitucci, longtime members of Pérez's working trio, joined the pianist to explore the repertoire featured on the group's recent Children of the Light release.

The PJF has the air of a family reunion, as many of the clinicians and musicians return year after year and tend to have ties to Boston's Berklee College and the New England Conservatory. In the case of guitarist Tom Patitucci, a Bay Area resident, participating in the PJF amounts to an actual family get-together, as it affords him a rare opportunity to spend time with his New York City-based brother John.

Other notables who contributed to the PJF's eclectic lineup included guitarists Adam Rogers and Steve Cardenas, who, along with drummer Brian Blade, were part of the John Patitucci Electric Guitar Quartet, a group that explored funk, fusion and straight-ahead styles; and Eastman School of Music jazz honcho and orchestrator Bill Dobbins, who conducted a big band doing large ensemble arrangements of Pérez's self- composed repertoire.

The Israeli quartet of Berklee alum and harmonica player Rony Eytan, sponsored by the Israeli embassy, provided a refreshing and unexpectedly successful splash of Mediterranean and Middle Eastern sonorities, while student ensembles from Berklee, NEC and the Thelonious Monk Institute of Jazz added more international flavors, featuring musicians from many lands.

The PJF also provides recognition for local jazz artists. This year's festival honored the memory of the late Panamanian vocalist Violeta Green, and her contributions to the small nation's vibrant jazz scene were amplified by the Panama Jazz All Stars and vocalist Luz Acosta. Other national acts included violinist Joshue Ashby and his group; Los Beachers, a venerable unit that formed in the late 1960s and became noted for its pan-Caribbean influences; and vocalist Karla Lamboglia, among others. The educational component was as vast and robust as the music programming. Of particular interest was a symposium dedicated to examining the contributions of Panama's Afro population, and a four-day series of presentations addressing the many aspects of the emerging music therapy field. Titled "The Fifth Latin American Symposium on Music Therapy," the ambitious undertaking was led by Patricia Zárate, wife of pianist Pérez and a noted educator and up- and-coming saxophonist. Lecturers from the U.S. and several Latin American nations were featured.

This correspondent was honored to conduct two clinics dealing with the history of jazz in Latin America and Afro- Brazilian music related to the candomble religion. Other sessions featured such authorities as National Public Radio music authority Beto Arcos and pianist and composer Kevin Harris.

The final evening of concert presentations was open to the public at no charge, and drew thousands to enjoy a potpourri of performances by many the festival's featured soloists and ensembles. Mostly staged on the grounds of a former U.S. army base in what used to be the Canal Zone, the PJF has evolved into the perfect model of a festival that places equal emphasis on performance and education.