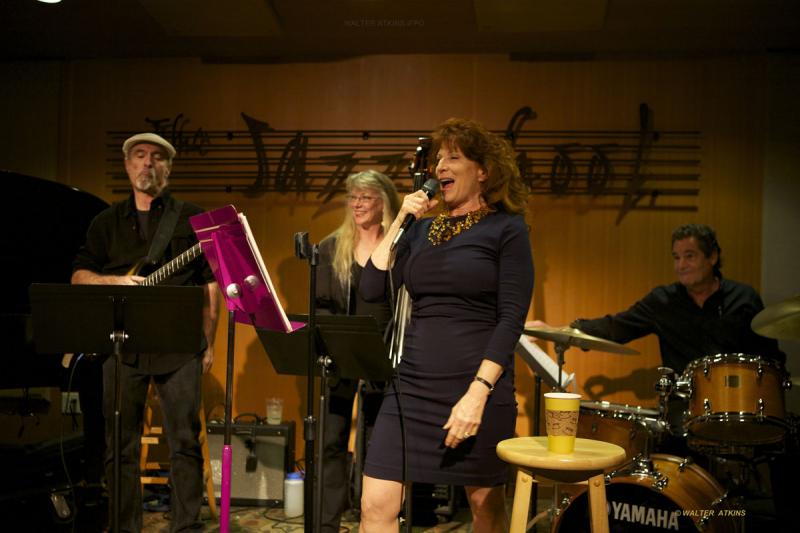 Pamela Rose's tribute to Etta James was a stirring live concert/talk/multimedia celebration of the life and career of the legendary soul, R&B, rock, gospel, and jazz artist. The set was interspersed with discussions of James' life experiences, house sing-a longs, and video clips that established context and acted as preludes to the next track.

The soulful performance took place at the California Jazz Conservatory's basement stage that was reminiscent of the intimate clubs of the Fifties and Sixties. Susan Muscarella, president and dean of CJC, introduced Rose and her band.

The group kicked off the set with the bluesy ladies anthem "Woman." According to Rose, James was the "gold standard" for vocalists. Her intensity and honest delivery made her unique. Hall and Caron exchange short solos during the song.

Rose dove into "Only Time Will Tell" with complete authority and a band that fully supported her. Davis was solid on bass and Hall played the piano with purpose. Two of James' tunes originally on 45 rpm records (remember this format?), were played and Rose discussed the famed singer's early career with Chess Records.

According to Rose ..."it takes a lot to do an Etta James song." She then talked about her birth and mother who was referred to as the "Mystery Lady." At age five, she wanted to sing like Professor James Earle Hines, the musical Director of the Echoes of Eden Choir. This famous gospel choir was later renamed The St. Paul Church Choir of Los Angeles. Hines told her to "sing from the gut." "Claim the notes... attack them." Her live performances were broadcast on the radio and Hollywood stars attended her shows.

During the audio of "Something's Got A Hold On Me," Rose encouraged the audience to sing the on screen chorus and it slowly warmed up. By the song's end, the whole crowd was clapping.

When Aunt Lu who was raising James in Los Angeles died, her mother moved them to San Francisco at age twelve. A young James was ..."pissed off in San Francisco." She met Sugar Pie DeSanto in school and formed a singing group which eventually auditioned with Johnny Otis and garnered a contract. Otis renamed the girl group The Peaches.

The band jumped into the Willie Dixon classic "I Just Wanna Make Love To You" with Caron wailing away on guitar and the well-oiled band was in the pocket. After a James audio clip intro, they deftly went into "All I Could Do was Cry" with Rose in full command. The fully engaged fans sang back up vocals following the on screen lyrics.

The ballad "Trust In Me" with Caron's crisp hot guitar licks was satisfying and Bryson contributed find brushwork. Chess liked "Trust" and James' other songs with " ice cream changes in them." "Tell Mama " took flight in the capable hands of Rose and the band. The group delivered the song with punch as Rose was energized and the guitarist howled away and then came back. This is one of my favorite EJ songs. In 1970, Janis Joplin performed the song during the Festival Express train tour through Canada.

Rose seriously belted, "I'd Rather Go Blind" with authority and displayed playfulness with her band. After another clip, she mentioned the renowned singer's substance issues and treatments. Lupe DeLeon, her long time manager and friend, helped resurrect her career by booking her for festivals and other gigs. When Chess Records was sold, he renegotiated James' royalty payments with the new owners to provide her an "income stream." She later signed with Island Records.

On "Blues Is My Business," Hall played a piano solo with vigor. Rose said James had a voice with a 2 1/2-octave range and the versatile vocalist sang high notes with power. On tour she didn't rehearse her band but they were keenly attuned to her on stage. James worked with Dave Matthews who said she was an honest performer, nothing phony. If she didn't feel it, she wouldn't sing it.

"Damn Your Eyes' was sung with bluesy conviction. "Sugar On The Floor" was James' favorite song because it reminded her of her mom, Dorothy. Singing this emotional tune would bring tears to her eyes. During her career, she also toured with her two sons, Donto, drums and Sametto, bass in her band. James earned her first Grammy in 1995 and also regained her musical legacy.

Rose clarified that the acclaimed James was the initial choice of then newly elected President Obama and First Lady Michelle Obama to perform "At Last" at his White House inauguration. Unfortunately James was not available.

According to Rose, Etta James " ...moved the needle of popular culture more than once." She was a commanding spirit.

Set List: Only Time Will Tell, I Just Wanna Make Love To You, All I Could Do Was Cry, Tell Mama, I'd Rather Go Blind, Trust In Me, Blues Is My Business, Damn Your Eyes, Something's Got A Hold On Me