BY JOHN SHARPE
November 3, 2015
Sign in to view read count 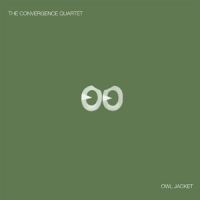 Owl Jacket forms the fourth release over a nine year period from the Convergence Quartet. At the outset, few would have predicted that it would become a going concern, uniting as it did two unknown young English improvisers in pianist Alexander Hawkins and bassist Dominic Lash and two of the brighter emerging talents on the New York scene in cornetist Taylor Ho Bynum and drummer Harris Eisenstadt. But the outfit's continued survival demonstrates not only persistence but also commitment to a strong group identity.

And the traits evident on their successful debut Live In Oxford (FMR, 2007) endure even now in a winning formula of road-tested charts which avoid convention and incorporate both improv attitude and individual prowess. Each member is a leader in their own right as well as an audacious instrumentalist, and as is customary each brings charts to the date. Together they breathe unruly life into abstract structures and intellectual rigor into earthy grooves. But they always preserve a link to the jazz tradition in that meter and melody never stay hidden for long.

A notable spark exists in the back and forth between Hawkins and Bynum. The cornetist excels at understated pyrotechnics. He uses whistles, murmurs, grace notes and muted muttering to circumvent expectations, yet remains resolutely musical. For Hawkins, now recognized as one of the leading lights in the British firmament, exhibitions of instrumental technique similarly take a back seat to doing what's needed at any particular moment. Lash and Eisenstadt, who display both poise and pressure, interlock seamlessly, reveling in making complexity seem natural and unforced.

While the drummer's arrangement of the Ghanaian "Dogbe Na Wo Lo" opens proceedings in a gentle stately processional with a lovely restrained solo from Bynum, it's the bassist's "Jacket" which really gives an insight into the collective method. In a pointillist opening section, Bynum's distant squeal is framed by Hawkins' spare chording. But then comes a change as an uneasy meter kicks in. Hawkins makes a dazzling declaration which piles clipped notes one atop another over edgy bass and drums. Bynum drifts in over the busy interplay until it morphs into a series of overlapping stop start strokes which gradually unite at the close.

The influence of Anthony Braxton looms large, manifest in the diversity of approaches to adventurous small ensemble composition. With its marching cadences and Bynum's ersatz bugle fanfares, "Coyote" especially evokes the reed maestro. "Azalpho" maintains a choppy staccato throughout, although everyone digresses from the form in brief bursts while the others tend to the pulse. Giving a neat symmetry, Eisenstadt's rendering of the traditional Gambian song "Mamady Wo Murado Sa" ushers the limited edition LP to an elegant finale, affirming another fine addition to the band's discography.