BY JOHN EYLES
November 3, 2015
Sign in to view read count 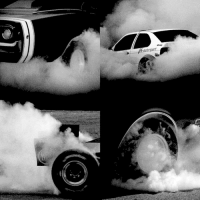 The Peeled Eye is the debut release from Boris Hauf's revived Shameless label, which has switched from being a subscription-only limited edition label to releasing experimental rock, noise and pop recordings. This release is an edition limited to three hundred copies pressed on yellow vinyl. Collectable, eh?

In The Peeled Eye, Hauf's own baritone saxophone is joined by Martin Siewert on guitar, Christian Weber on bass and Steve Heather on drums. Between them, the four members have impressive improv credentials behind them in groups such as Efzeg, Mersault and Trapist, so it was surprising to see this grouping described as "a noisecore / doomjazz quartet" with no mention of improv. Although definitions of such sub-genres tend to overlap after a while, this designation does successfully convey the bottom-heavy, density of the quartet's soundscape as well as their music's predominantly dark mood, a combination which makes for compelling, addictive listening.

On the seven tracks, ranging in length from just over two minutes to just over twelve, the four members meld together into an awe-inspiring unit whose adrenalin-fuelled bravado at times sparks memories of Last Exit. All four contribute equally to the ensemble sound with no pecking order at work, and no hint of a distinction between solo instruments and "rhythm section." They all take on both roles, the four strands weaving together into a rich tapestry in which the instruments remain clearly distinguishable, never degenerating into noise.

When Hauf plays his baritone's lower reaches, the combination with Weber's bone-crunching bass guitar is thrilling stuff, the quartet's trademark sound. However, this is a group of equals, with Siewert and Heather just as important to the totality. The Peeled Eye creates music that is greater than any one of the four. More soon, please, Shameless.