Chano Dominguez: Over the Rainbow 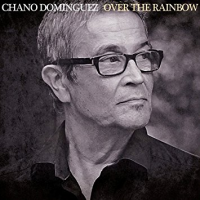 Jazz music is an interpretive art form, it is in fact, the quintessential American art form. This is an undeniable attribute to the genre, which over the past century has impacted musical culture internationally, sharing it's compositional and improvisational commonalities and absorbing the unique musical identities of neighboring musical movements.

Certainly this is the case with the musical forms of Latin America, with notably strong contributions emanating from Brazil, Argentina, Chile, and perhaps most prominently, the Afro-Cuban rhythms and harmonizations evolving just off the southeast coast in the Caribbean. These contributions were brought to light in the 2000 film and subsequent recordings created by Spanish director Fernando Trueba, Calle 54 (EMI, 2000). The film highlighted such artists as Brazilian born pianist Eliane Elias, Cuban piano masters Bebo Valdes and Chucho Valdes and a pianist from Cadiz, Spain, little known to the elite American jazz audience at the time, named Chano Dominguez. Dominguez revolutionized the use of the piano in flamenco, prior to his influence, almost exclusively a domain for the more traditional instrument, the guitar. While much of latin jazz is rhythmic adaptation of traditional compositional and harmonic components of the form, Dominguez has distinguished himself as a true pioneer of flamenco jazz, incorporating flamenco palos, generally composed of 12 beats, with traditional jazz composition written in 4 or 3. While the palos bulería, or soleá may seem incomprehensible to the sensibilities of the swing or jazz ballad forms, Dominguez, whether playing with his band, or in the case of this recording, playing solo piano, seamlessly blends these musical worlds together compositionally, and in their obvious commonalities-those derived through the art of improvisation.

On his latest release, Over the Rainbow, Dominguez mixes jazz standards, latin classics, and original compositions on this solo live performance recorded in February of 2012 at the Palau Falguera in Barcelona, Spain. From note one, the listener is drawn in, surrounded by musical images that emphatically state the elegance and historic brilliance of the interpreter, the esteemed Mr. Dominguez. His interpretation of the well known Violeta Parra composition, " Gracias a la Vida," a classic that set the standard for the movement, "Nueva Canción," exudes the joy and soulful passion we have come to expect from Dominguez, whether playing with his flamenco ensemble, a jazz trio, or as a true master of solo piano performance.

I found his inclusion of the Thelonius Monk compositions, "Monk's Dream," and "Evidence, " to be fascinating on several parallel levels. American jazz, and Spanish Flamenco music both find their roots in oppressed peoples on their respective continents, jazz from the African American population that endured centuries of slavery, and whose battle for social justice continues presently. Flamenco which is rooted in gitano, or gypsy culture, bears the marks of oppression and injustice as well. One might contend they are both expressions of what the jazz world refers to as the blues. Both forms radiate the soul, or duende of their respective cultures.

The parallels between these two artists, Monk and Dominguez are undeniable as well, both daring and challenging the musical universe with their personal musical adventurism, cultural diversity, and pioneering spirit that tends to create positive, impactful innovation. "Monk's Dream," whether played by Dominguez, or Monk himself, reaches back to historical precedence, with elements of ragtime, stride, and Ellington inspired swing, emanating a joyous caricature brilliantly intertwined with the fluid virtuosity prevalent throughout this recording. Few musicians can create the total musical experience for the listener as a solo performer. Dominguez, who has thrilled us for more than two decades in ensembles of varying size, and with such luminaries as Paco de Lucia, and Wynton Marsalis, is clearly comfortable creating an almost orchestral feel as a solo performer, and does so in stunning fashion over the length of Over the Rainbow.

"Mantrería," and "Marcel," are original compositions inspired by his children, "Mantrería" being a play on words, between the flamenco palo bulería, and the word mantra, to express the repetitive mantra like theme of the piece. Mantrería is lively, and enchanting, exhibiting so many of the characteristics of the unique piano style, and compositional genius that Dominguez has dynamically shaped over his storied career. It is in sharp contrast to the more pensive and reflective, "Marcel." "When Marcel was born, he gave me this melody, I always write about the people I love and they bring their own melodies to me, I don't know how, but I feel it," says Dominguez, refering to his children Marcel, Serena, and Pablo. "Marcel" does indeed personify the young gentleman that is the composition's namesake, and in common with "Mantrería," a father's unconditional love for his most precious source of inspiration in life, his children.

The Arlen/Harburg classic, "Over the Rainbow," is one of the most beloved songs of the twentieth century, and alludes to a place far, far away, behind the moon, beyond the rain. It incites a journey down a path unknown, to places unknown, the spirit ignited with the reason of hope and inspired adventure. Dominguez moved to the United States three years ago, first to Seattle, and presently, to New York, to indeed embark on such an adventure, with the hope of continuing his musical legacy with new inspired projects in America, in concert with the genius of American interpreters of both improvisational and orchestral forms. His partnership with Sunnyside is a wonderful start. The concept is unique, the playing brilliant, and the recording quality without peer. The sound jumps out of your device as if you are seated in an intimate venue, just a few meters away from the piano.

Chano Dominguez has the unique ability to navigate different musical worlds, to create a sound that becomes one music, that unites the world of music by building bridges to places that nurture cultural understanding and enduring peace. This ability is a joyous presence that is sorely needed in these times. He is able to unite in an all encompassing orchestral light, all that is just and beautiful in the world. Somehow solo piano exposes the artist to the core of his or her being, and expresses the innermost point of one's passion for the music, and outer reaches of one's imagination.

Over the Rainbow is a genius effort from a historic musician who continues his storied narrative here in America. We are honored and grateful he is here. It is a giant leap forward on a musical pilgrimage with no end. His offerings along the way have a unique organic presence that reminds us that we all emanate from a colorful palate of cultures worldwide, but exist as a single canvas of humanity. As we express each color as unique and beautiful, we search for ways to have them blend together, to add and subtract them, to create an interaction of unity going forward. Dominguez continues to draw from the cultures and people that inspire his creative genius, and apply them to a tangible form we can all understand, and aspire to emulate. There is a maturity in his playing on this record, a thoughtfulness that pays homage to the multiplicity of musical currents that rise to the top during solo performance. To a listener unfamiliar with the work of Mr. Dominguez, it serves as a sampler of his stunning virtuosity, and joyous fusion of flamenco and jazz. To those already engaged in his musical voyage, it represents a snapshot along the way to new horizons, behind the moon, beyond the rain.