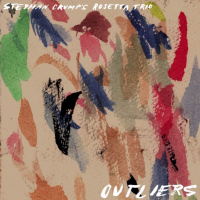 Truly one of the most versatile of today's in-demand bassists, Stephan Crump has proven himself equally adept in a variety of musical contexts. Not only is he Vijay Iyer's longtime associate in both his trio and sextet formations, but he also finds time to pursue free improvisation with Ingrid Laubrock and Cory Smythe; that trio's Planktonic Finales (Intakt) was one of 2017's highlights. And he's always remained open to working with musicians in the worlds of R&B and alt-rock, with a resume that includes stints with Patty Austin, Big Ass Truck, and Dave McDonald (of Portishead). It's no surprise, then, that on his latest release, Outliers, we see yet another facet of Crump's skillset, as he teams up once again with two guitarists, Liberty Ellman and Jamie Fox, for a set of relaxed yet stimulating music that merges strong melodies with finely-honed group telepathy.

Ellman and Fox have worked with Crump since 2004 as the Rosetta Trio, and this is their fourth release. Like Crump, these broad-minded guitarists show no reluctance when it comes to inhabiting diverse stylistic worlds: Ellman's worked with everyone from Henry Threadgill to Steve Coleman to Myra Melford, and his own aesthetic has drawn liberally not only from jazz but from hip-hop and funk as well; Fox has strong jazz bona fides but has also partnered with Carla Thomas, Joan Baez and Blood, Sweat, & Tears. Given these musicians' pan-idiomatic orientation, the music on Outliers is a bit tricky to categorize. On first listen, it evinces a somewhat laid-back, easygoing feel, as though three old friends were gathered together for an evening's impromptu jam session. But the quality of musicianship on display soon reveals it to be much more than that.

Part of the reason for the album's deceptive simplicity is just how comfortable the trio sounds together: all three possess an assuredness and compatibility that allows the music to unfold seemingly effortlessly, belying its underlying sophistication. With the exception of Ellman's "Cryoseism," all of the album's compositions are Crump's, and they demonstrate not only his way with a melody—the supremely catchy "Re Eyes" is the best example—but also his love of counterpoint and subtle rhythmic complexity. With Ellman and Fox playing acoustic and electric guitars, respectively, and Crump's resonant bass completing the aural picture, there's a lot the three can do to vary the texture and mood of each piece, even though generally the music stays within a fairly restrained temperament.

"Middle March" illustrates the chamber-like aspect of the trio, with Crump's tuneful arco at the outset offering contrast with Ellman's and Fox's perfectly articulated lines. And "In Waves" sees the trio in well-synced rapport, with Crump's nimble bass guiding the guitarists' sprightly chords and improvisational flights. The title track, the album's longest at over seven minutes, gives a glimpse of the rhythmic creativity of the trio, with intertwining staccato passages that create an irresistible momentum, before eventually dissolving into a lovely coda, Crump returning to arco to ease the track into its lyrical conclusion. Not to be outdone, "Synapse" may be the most enticing track on the record, a showcase of the players' virtuosity, with rapid-fire phrases exchanged by Fox and Ellman, and Crump somehow keeping up with indefatigable commentary.

While the album can certainly be appreciated solely in terms of its technical proficiency, its emotional content may be its strongest attribute—shaped, perhaps, by the unfortunate subtext behind some of the music on this disc and its predecessor, Rhombal (Papillon Sounds, 2016). That album was dedicated in its entirety to Crump's brother Patrick, who died in 2014. Two of the songs here, "Middle March" and "Dec 5" were actually written for that earlier session but never recorded, while "Esquima Dream" appears on both records. Here "Esquima Dream" serves as the closer, and it's an ideal way to finish the record; rather than a somber farewell, it's one of the more upbeat tunes on the album, with a contagious melody and driving rhythm. It highlights the enduring energy and melodicism of Crump's music, and it caps another excellent entry in the catalog of this splendid trio.

In Waves; Re Eyes; Middle March; Outliers; Synapse; Dec 5; Cryoseism; A Way From, A Way To; Esquima Dream.