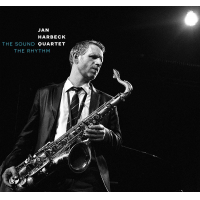 Jan Harbeck is a Danish tenor saxophonist whose debut with his quartet, In the Still of the Night (Stunt, 2008), received a Danish Grammy. At that time, Kresten Osgood was playing the drums. On the quartet's second album, Copenhagen Nocturne (Stunt, 2011), he was replaced by Anders Holm, but otherwise the line-up with bassist Eske Nørrelykke and pianist Henrik Gunde was intact. On these two albums, the musicians perfected a stylish noir universe of softly swinging jazz with interpretations of gems from the Great American Songbook.

The Sound The Rhythm is the fourth album by the Jan Harbeck Quartet. It follows the collaboration with saxophonist Walter Smith III on Variations in Blue (Stunt, 2014). That album was significant because it began Harbeck's documentation of his own compositions with the quartet, and since then he has continued to explore his own voice through compositions.

Harbeck has professed a love for Ben Webster and Paul Gonsalves, and their way of playing ballads and swinging standards from the heart has seeped into his playing. He has also received modern impulses from George Garzone, whose advanced idea of shaping atonal lines without a fixed harmonic pattern has influenced his musical language, but it all began with Ben Webster.

Webster still looms large on The Sound The Rhythm. In 2018, Harbeck and Gunde jointly received the Ben Webster Prize and when they played their concert for the award ceremony, the seeds of the album were sown. It showcases Billy Strayhorn's "Johnny Come Lately," a Webster favorite, and four Webster compositions: "Poutin,'" "Woke Up Clipped," "Shorty Gull" and "I'd Be There." These pieces are played impeccably, adding new nuances to Webster's vocabulary of swinging lyricism, but the real highlights of the set are the five new compositions by Harbeck.

"Tail That Rhythm" plays on Webster's iconic "Cotton Tail," but brings the classic up to speed with perfectly shaped lines and a soft rhythm propelled by Holm's brushes and Nørrelykke's airy walking bass. On the other hand, the tango ballad "Tangorrus Field" brings back memories of "La Rosita" from the quartet's first album, but this time Harback is telling his own story in a subdued, sensual drama.

Throughout the album, there is a carefully calibrated balance between ballads and up-tempo-pieces and lovely details to appreciate like the double drum playing of Holm and guest Morten Ærø on "Woke Up Clipped" and "Shorty Gull," and the appearance of another guest, Jan Zum Vohrde, who adds his elegant alto saxophone playing to "I'd Be There."

While these guests add spice, it's the empathic playing of the quartet that is the foundation of the album. The four musicians play for each other and together they transform Webster's and Harbeck's pieces into their own language. It's not just a repetition of the past. The dissonant lyricism in the piano intro to the closer, "Circle," could only come from a post-swing period, but when the romantic voice of Harbeck's saxophone breaks through, the connection to Webster is established again. It's different and yet the same. That sound. That rhythm.