Home » Jazz Articles » Adam Smale: Out of the Blue

Adam Smale: Out of the Blue

By Jakob Baekgaard
April 6, 2014
Sign in to view read count 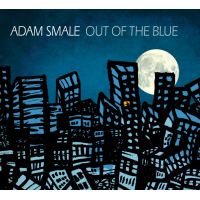 Out of the Blue is the U.S. debut album by Canadian-born guitarist Adam Smale, but Smale hasn't come out of nowhere. In 2000, he released the album Fun City in his home country and received plenty of airplay and critical acclaim and in 2009 he moved to New York and since then he has become a vital addition to the jazz scene in the city.

New York is celebrated on "NYC Love Affair," a cool, swinging tune that sways along with elegant guitar patterns and a groove that goes directly into the blood. Smale is supported by the trio Tri-Fi, which is perhaps best known for their strong backing for singer Curtis Stigers, but they also have their own thing going and here they can be found in perfect sync with the guitarist.

Throughout the album, Smale shows great awareness of jazz tradition. He re-imagines the famous riff from trumpeter Miles Davis' composition "So What" on "New Start," gives an original reading of saxophonist Wayne Shorter's "Yes or No" and on top of it all, he combines the rhythm of saxophonist Charlie Parker's "Confirmation" with the chords from the standard "Autumn leaves" in a bold, but successful experiment called "Autumn Confirmation."

It is a testimony to Smale's unique approach to his instrument that he plays on custom-made seven string-guitars and this isn't a gimmick, but rather reflects his need of being able to express himself fully on his instrument without any limitations.

Title: Out of the Blue | Year Released: 2014 | Record Label: Ropeadope