Amon Tobin: Out From Out There 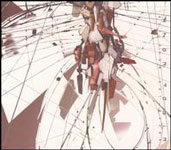 In the world of electronic music, it's too easy to get trapped in the details or, conversely, gloss them over with thick swaths of sound. (That is, of course, if you're not making the kind of mass-market dreck that the deaf can enjoy.) In the case of experimental electronica, the situation is particularly lopsided. The tools at today's musicians' disposal are so sophisticated that endless samples and loops can be thrown in the mix ad nauseam. The balance is so easily lost.

Skirting these extremes, Amon Tobin has staked out his ground quite convincingly. Tobin turned heads with his alter-ego, Cujo, before Ninja Tune picked him up and turned him into something of an underground star over the course of four records. His style essentially falls into the category of drum-n-bass , though that genre has now morphed into a jungle of samples and outer excursions. Tobin builds his music from relatively simple parts, strung together in loops and following themes that evolve and devolve over time. The essence of the music is rhythm: all the parts, whether stitched into evolving loops or soaring above, serve to complement and flesh out a pulse. Without exception, that pulse is energetic and sharp.

On Out From Out There, the Brazilian expatriate draws from his usual staples, most prominently a decidedly jazzy emphasis. That extra flavor, which has distinguished him from the start, translates into triplets and off-kilter rhythms that sometimes owe more to bossa nova or bop than rock n roll. Over time, he has increasingly integrated loops and patterns into larger units which then serve as building blocks for an entire tune. This big-picture approach serves his music well, increasingly endowing it with an orchestral sensibility and lending it a lyrical character. "Searchers" features rich textures flowing back and forth with oceanic energy, decidedly harmonic in emphasis.

"Verbal" goes full circle, digging deep into a funky groove, flaunting wordless vocals that sound as if they were extracted from vinyl with more than a bit of twist. What makes this tune work is the uncanny way these abstract raps, assembled from bits and pieces, flow as spontaneously and cleverly as the hippest freestyler out there.

With the latent decadence inherent in '90s electronica, it's refreshing to see stalwarts like Amon Tobin hold tight to roots and still continue to flesh out a very distinctive sound.

Visit Amon Tobin and Ninja Tune on the web.

Title: Out From Out There | Year Released: 2003 | Record Label: Ninja Tune