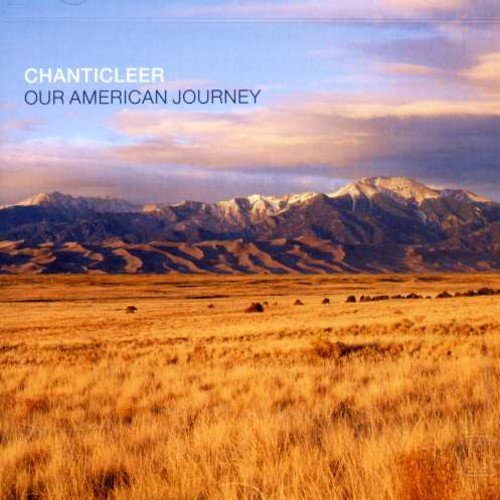 ...when I get home to that bright land!

is an intersection of multiple musical directions that the all-male choral group Chanticleer has been exploring for the past 20 years. Thematically, Our American Journey is a pan-continuation of several previous releases. The disc can be conveniently divided up according to the groups past and current interests. The disc opens with the traditional Appalachian melody "Guide Me, O Thou Great Jehovah" and closes with "Wayfarin’ Stranger" and "I am a Pilgrim," all of which would have fit in well on the groups survey of the American Spiritual, Where the Sun Will Never Go Down (Elektra/Asylum 90878, 1994).

Juan Guitiérrez de Padilla (1590-1664) and Juan de Lienas (fl.1620-1650) follow these American Traditional compositions with religious pieces further exploring Chanticleer’s interest in the Mexican Baroque music they presented on Mexican Baroque (Teldec Classics96353, 2000) and Matins for the Virgin of Guadalupe (Teldec Classics 21829, 2001). Chanticleer specialty William Billings (1746-1800) shows up with a cathedral organ-like "David’s Lamentations," its text based on II Samuel 18:33. The group nods to the American Songbook the Gershwin Brother’s "Love Walked In" and a spooky "Willow Weep For Me," both of which would have been at home on Lost in the Stars (Teldec Classics 13132, 1996).

Perhaps central to the recording are the genius arrangements of the Stephen Foster treasures "Jeanie with the Light Brown Hair" and "Camptown Races." This is pure Americana, presented beautifully with panache and playful reverence. Music Director Joseph Jennings adds his arrangement of Doyle Lawson’s "Calling the Children Home" to great effect, touching the source in Country Spiritual Music. Chanticleer’s lush shroud of voices envelope these songs, and all of the songs on the recording, with a aural down comforter, providing them with a warm and loving tone. The sonic soul of these pieces owes much to the warm and crystalline acoustics of St. Ignatius Catholic Church in San Francisco, Chanticleer’s spiritual home, where they yearly conclude their annual Christmas tour.

Chanticleer remains America’s premiere choral ensemble, this fact reinforced by Our American Journey. All that ardent listeners have come to expect is delivered with grace and beauty.