Sonny Landreth: The Road We're On 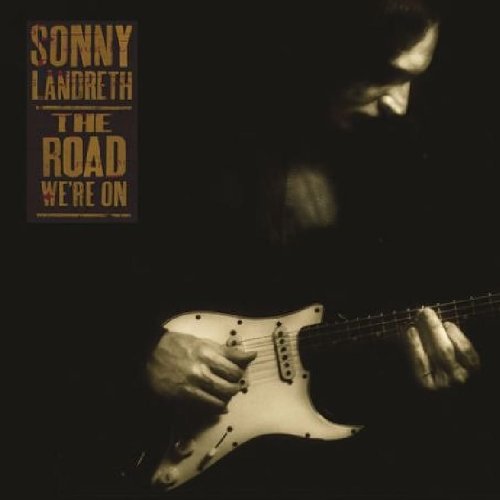 . . .Falling out of solution, perfectly.

The title of innovator is one not to be overused, and in all of the history of music there have only been a handful. When restricting the discussion to the technical performance aspects of guitar, three true innovators come to mind. Jimi Hendrix shot the electric guitar into the stratosphere with his blues pyrotechnics on songs such as "Machine Gun" and "Voodoo Chile (A Slight return)." Eddie Van Halen came along to initiate the "hammer-on" technique of lead guitar playing that was later perfected by others, such as Joe Satriani and Stanley Jordan. Duane Allman, who, like Hendrix, existed as the musical lightning rod in death held position until a new guard came along, defined electric slide guitar playing on the Allman Brothers Band's performances of "Statesboro Blues" and "One Way Out". Now, rising out of the bog of Bayou Teche, Canton, Mississippi-born, Lafayette, Louisiana-raised Sonny Landreth redefined and perfected the art of electric slide guitar playing.

Born in the hometown of another slide guitarist, Elmore James, Landreth seems as to have completely soaked up the Southern essence as through osmosis, concentrating that essence into his rippling slide guitar style. After moving to the swampy interior of Louisiana and gigging with local bands, Landreth landed with Clifton Chenier, who helped Landreth refine the Zydeco jones that permeates the slide guitarist's music. Landreth bobbed to the popular surface as a member of John Hiatt's great touring band, The Goners. Here, Landreth replaced Ry Cooder for the Bring the Family tour and was on hand for recording one of Hiatt?s shining moments, Slow Turning. Mimicking the short career of Duane Allman, Landreth became a much sought after session guitarist playing on recordings by Shelby Lynn, Dr. John, and Clarence "Gatemouth" Brown.

The Road We?re On

is Landreth?s eighth recording as a leader and his second for the Sugar Hill label. The 2000 record Levee Town (Sugar Hill 3925) revealed a distinctly positive evolution in Landreth?s guitar playing and singing when compared to his earlier recordings Outward Bound and South of I-10, which themselves are uniformly fine. It is decidedly a blues album, one that Landreth claims he has felt coming on for some time. But no boring 12-bar recital is this recording. The Road We?re On is crammed full of Landreth's totally original slide guitar playing, a style that creates a new orthodoxy in the bottleneck genre. Landreth plays with a combination of the slide, fretted notes, and the novel use of his right-hand middle and ring fingers that creates a cascade of notes resembling a liquid mercury thunderstorm. Landreth is fond of blending the acoustic and electric, as he does on the opener "True Blue," where he starts with a National Steel-body guitar over which he slides his soupy electric slide. This provides greater depth to the music. Mixed in this blues gumbo are the Cajun rockers such as "Gone Pecan" and "The Promised Land." "All Bout You" is a rompin' stompin' rant about a selfish woman. "A World Away" recalls "Canadian Sunset" and is a minor blues structured after B.B. King's "I Got A Mind to give Up Livin'."

True Blue; Hell At Home; All About You; A World Away; Gone Pecan; Natural World; The Promise Land; Fallin' For You; Ol' Lady Luck; Gemini Blues; The Road We?re On; Juke Box Mama. (Total Time: 76:42).