By Troy Dostert
January 3, 2019
Sign in to view read count 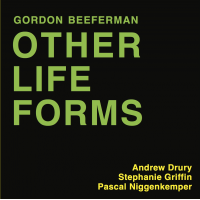 A keyboardist and composer with ambitious reach, Gordon Beeferman creates music designed to surprise and challenge. He specializes in avant-garde contexts, whether with his Organ Trio (alongside guitarist Anders Nilsson and drummer Ches Smith) or in a larger septet format, with Music for an Imaginary Band (Generate Records, 2009). And then there's his work writing operas with librettist Charlotte Jackson, the most recent of which is The Enchanted Organ: A Porn Opera. So it's not really a shock to encounter his most recent release, the aptly-titled Other Life Forms, and its idiosyncratic compositional strategy: one that utilizes thoughtful structure but with an unmistakable spirit of uncanny exploration.

Beeferman's partners here are familiar names in the world of cutting-edge improvised music. Violist Stephanie Griffin, bassist Pascal Niggenkemper and drummer Andrew Drury offer just the right balance of precision and creativity needed for Beeferman's unique compositions. Perhaps the most straightforward piece is the album's opener, "Get Got," a catchy post-bop tune that builds its energy from Beeferman's piano scamperings and teeters just on the edge of chaos, with Griffin's frantic improvisatory flourishes a welcome highlight. A similar venture into jazz-inflected terrain happens on "Puddle Jump," an up-tempo piece with plenty of room for Beeferman and Griffin to stretch out.

The other tracks are much more oblique, with Beeferman's off-kilter approach to composition taking over. "Bad Strategy" shifts between discipline and freedom, with an insistent theme that is eventually abandoned to make way for some unmoored musings; and "Path" reveals a much more tenuous world for discovery, with a simmering unease just under its understated chamber-jazz surface. For some pieces, Beeferman leaves aside the piano altogether in favor of his Hammond organ for additional atmosphere, as on "Creep" and "Hourglass Daydream." These pieces unfold carefully, but somewhat disturbingly—as when Beeferman and Griffin gradually heighten the tension at the heart of "Creep," creating an unsettling mood that gets progressively weirder as the music evolves, with Niggenkemper and Drury lending a hand in accentuating the piece's foreboding sense of menace.

This is music that isn't afraid to take its time; Beeferman prefers patient, devious statements to overt, brash ones. This requires investment on the part of the listener, as at times the music can possess a somewhat static quality. But it's an imaginative set of music, to be sure, and more than enough to keep Beeferman on the radar when it comes to forward-thinking, creative approaches to jazz and improvised music.