By Ian Patterson
November 14, 2011
Sign in to view read count 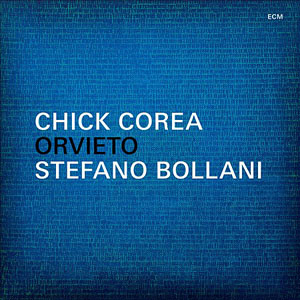 Though Chick Corea and Stefano Bollani hail from opposite sides of the Atlantic they're kindred spirits in many ways. Two of jazz's more prolific musicians, both have explored music in any number of settings. Both embrace the roots and traditions of jazz yet refuse to be shackled. A love of Latin melodies is also common ground, but perhaps what binds them most are their boundless curiosity and an inherent desire to be at play. Corea recorded Play (Blue Note, 1992) with Bobby McFerrin and this could be Volume 2, as playfulness royally trumps virtuosity in dialogues imbued with joy.

"Orvieto Improvisation 1" opens this set with a wintery impressionism that's stark and melancholic. This mood carries over to the first couple of minutes of "Retato Em Branco E Preto," though gradually melodic lines emerge out of which a tango-ish rhythm asserts itself. Dancing right hands alternate, and when the rhythm subsides the pianists immerse themselves simultaneously, though with music-box delicacy.

"If I Should Lose You" is altogether livelier, and there's romanticism here and on "A Valsa de Paula" reminiscent of pianist Bill Evans. There are shades of Evans' Conversations with Myself (Verve, 1963) during the latter's hypnotizing interplay, though rarely do Corea and Bollani climb all over each other on Orvieto. Instead, the sensation throughout is of two kids for the most part happy to share the same toy.

"Doralice" is a playful romp, with only slight embellishment of the catchy melody, though Corea and Bollani slide in and out of unison lines and counterpoint in a short but fascinating section. Some of the most quietly exhilarating playing comes towards the end of Fats Waller's "Jitterbug Waltz," with the pianists trading big, sweeping runs in the high keys.

The lack of reference to bop lends a bygone-era feel to the music on the whole, a throwback to days when stride, waltz and a more classical form of romance dominated jazz piano. There is more elegance than muscle on show, typified by the lovely "Este Seu Olhar" and the gentle interpretation of "Darn That Dream," which rarely sounds like more than one pair of hands are at work. Hand claps and piano-body percussion set "Tirititran" on its way, but this tune too settles into a fairly easy-listening groove, with occasional flourishes.

Corea's "Armando's Rhumba" breaks the mold, with bolder chords and more exuberant playing that is more Michel Camilo than Erroll Garner. Similarly, "Improvisation No. 2/Nardis" provides striking contrast; starting slowly, Corea and Bollani gradually move from the reflective mood of the intro into more frenetic terrain, punctuated by sharp exclamations. The final third of the improvisation has a folksy, Mediterranean core, around which the two pianists build robustly.

An old-time charm colors "Blues in F," and, in keeping with the recording as a whole, is more about feel than exhibitionism. Orvieto is an unpretentious and playful collaboration which makes for enjoyable listening, in keeping with the New Year celebrations at the Umbria Winter Jazz Festival ( where it was recorded); nor does it pretend to be anything else.