By ERIC MILLER
February 22, 2012
Sign in to view read count
Among Ornette Coleman's periods of relative quiet, the turn of the 1960s into the 1970s may well be the most frustrating. More than three years of musical life—from the final Blue Note sessions of April-May 1968 to the release of Science Fiction on Columbia in 1972—remain shrouded in mystery and obscurity. Every recording made under Coleman's name during this period was done live; worse, all are either unavailable or unauthorized (to slightly varying degrees), forcing fans to hold out for rare original LPs, purchase cheaper quasi-bootleg CDs, or even resort to extra-legal means like internet downloading. This is highly unfortunate, in part because their collective mental energy would be better spent willing for an official release of the 1973 Morocco tapes, but also because at least two vital documents of Coleman's career—classics, even—exist in this out-of-print grey area. 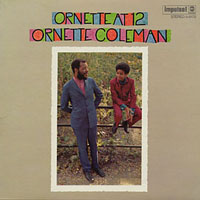 Ornette at 12 is one such classic. The 32-minute album consists of all that remains of a May 1968 performance at Berkeley, CA, and feels in many ways like a direct continuation of what Coleman was doing at Blue Note. The rhythm section of Charlie Haden on bass and Coleman's son Denardo on drums (first heard on his father's 1966 Blue Note recording, The Empty Foxhole) returns, as does tenor saxophonist Dewey Redman, fresh from Coleman's New York Is Now! and Love Call (both Blue Note, 1968) sessions. Indeed, on the opening "C.O.D.," Redman takes the first solo and appears to pick up where he left off on New York is Now!'s "The Garden of Souls"—aggressive yet deeply eerie playing replete with deliberate overblowing and speaking/singing through the instrument for multiphonic effect. Coleman also turns in an inventive alto solo on "C.O.D." before switching to trumpet for "Rainbows." Despite an almost prototypical sing-song theme and trace elements of Texas blues in Redman's solo, something sinister lurks in Haden's uncharacteristic reliance on arco and Denardo's exceedingly free approach to tempo (or, more accurately, lack thereof)—a nervous energy further honed by his father over the course of two careening trumpet solos. The mental image summoned forth is closer to falling shrapnel than anything resembling a rainbow.

"New York" is the album's free "ballad" statement. It suits Denardo's unconventional drumming just fine, and indeed he appears to audibly grow in confidence as the track progresses. His contribution to the record as a whole is a cut or two above his much-derided (at least at the time) turn on The Empty Foxhole; the technique is sharper, the communication with Haden clearer and more idea-filled, even while his relative inexperience continues to serve his father's purposes in the form of freedom from ingrained musical cliché. The closing "Bells and Chimes," finds Ornette mounting his own assault against tradition as he picks up his violin and saws his way through a defiant piece of free jazz which nevertheless resonates around an unmistakably bluesy and practically catchy line. There must be at least a fans for whom Coleman's violin playing is a source of endless fascination. At this stage in his career, it was so outwardly lacking in discipline, so unlike his alto in tone and texture that he seems to have tapped into some previously unreachable corner of his inner being in order to make it possible. 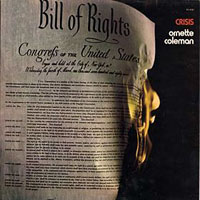 The angst at times implicit in Ornette at 12 reaches a boil in Crisis. The title, of course, suggests something amiss in Coleman's world or in ours; the LP cover, depicting the American Bill of Rights in flames, establishes a direct connection to the social turbulence of the late sixties, and an exceedingly dark mood pervades every track, in outbursts of chaotic noise and in moments of recoiled tension. Unusual in its political bent if not its very anguish, Crisis is the product of another university appearance—New York University, March 1969. The previous lineup of Ornette and Denardo Coleman, Redman and Haden is back, augmented by cornetist/flautist Don Cherry, who alters the group's dynamic in immeasurable ways. Actually, he only get one proper cornet solo, on "Comme Il Faut," but it very much defines the track, seeming to cry out in the most wounded yet somehow elegant of tones. "Space Jungle" opens to the unexpected (and unaccompanied) strains of the double Indian flute, a reflection of Cherry's then-burgeoning interest in a World music as yet undefined.

Three of the album's five tracks eschew traditional solos. The plaintive "Broken Shadows" employs a constantly repeated theme over which Cherry, Redman, and Ornette trade obbligato passages to rather soul-stirring effect. "Trouble in the East" and "Space Jungle" are collective improvisations (though the former suffers from particularly poor recording quality). By contrast, Haden's "Song for Che" is given a more conventional treatment than it received on the bassist's own Liberation Music Orchestra (Impulse!, 1972). In his book, Ornette Coleman: A Harmolodic Life (William Morrow, 1993), John Litweiler calls the Crisis version "the finest performance of this loveliest of all Haden songs." Those more accustomed to LMO version may be inclined to disagree; without the ahead-of-its time folk-song sample, and with less room for Haden's solo to breathe, the piece loses something of its Latin essence. It becomes instead a blowing vehicle—which is not to say that Coleman and Redman are not up to the task. Coleman, in particular, provides a spirited solo. 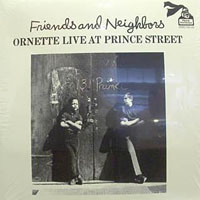 Crisis marked the end of an exceedingly brief tenure with Impulse!. 1970's Friends and Neighbors, released on the Flying Dutchman label and reissued on vinyl in 2011, is now the most easily obtainable Coleman recording of the period—even while (apparently) remaining (technically) unauthorized—but also, unfortunately, his least inspiring. Perhaps the imposing heights reached on Coleman's Impulse! sides make a certain amount of disappointment inevitable, but Friends and Neighbors represents an oddly traditional retreat—all swinging exuberance maintained by a constant beat, with relatively little in the way of collective improv—especially surprising given its status as the sole available document of Coleman's short-lived Artists House in Soho, a sort of failed experiment in combining music and living space. Redman and Haden return, Cherry is gone and Ed Blackwell replaces Denardo. The African polyrhythms in Blackwell's musical DNA shine through in playful interaction with Coleman's alto on "Long Time No See," an album highlight if not a redeeming moment following the embarrassing amateur chorus on the title track ("friends and neighbors; that's where it's at"). 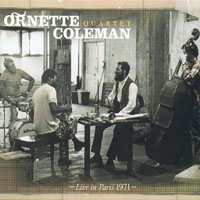 Perhaps a better bookend to this consideration of unsung era in Coleman's music would be the quartet's European tour of November 1971 (two months after the main Science Fiction sessions), by which time the men functioned as a well-oiled machine, quite possibly comparable to the 1959-61 Atlantic groupings. Three concerts exist on CD—Belgrade, Berlin—under the title Whom Do You Work For? (Get Back, 2007)—and Paris—with significant overlap in track listings. "Street Woman" and "Written Word" are performed on all three; so is "Rock the Clock." The latter is especially interesting in comparison with the Science Fiction studio take, which makes its point—Ornette, on violin, and trumpet and Redman, on musette and tenor, freely chart a course to the Space Jungle, brought back down to Earth only by the timely interjections of Haden's jarringly wah-wah'd funk/rock bass line—in scarcely more than three minutes. The concert versions carry on for as long as 15 minutes, exploring some rather violent textures but not without an overall loss of focus: Haden uses the wah-wah pedal in Paris, complimenting a surprisingly funky tenor solo; in Berlin and Belgrade, however, the bass is barely audible, with all deliberate distortion seemingly shifted to Coleman's violin.

It is doubtful that anyone, apart from the most ardent fan would require all three of the live 1971 recordings in their collection. Live in Paris 1971 enjoys the best sound quality and packaging, and also includes an interesting performance of Love Call's "Airborne," albeit mis-titled "Silhouette"—an oversight strangely unnoted in Peter Niklas Wilon's excellent volume Ornette Coleman: His Life and Music (Berkeley Hills, 1999). Backtracking two years, Belgium 1969 (Gambit, 2008)—also known as Broken Shadows from the days when it circulated on LP—is another European concert available on CD and well worth hearing. The program largely duplicates Crisis, minus Cherry and Denardo, and with Friends and Neighbors' "Tomorrow" substituted for "Trouble in the East." Immediately prior to this last track, there's a snippet, as brief as it is unexpected, capturing the soft-voiced Coleman in what appears to be a rant, rendered fragmentary and almost incomprehensible by the quality of the recording. He complains that not enough people are hearing his work, that he has to do everything himself, that he also has to spend time taking care of things that don't involve music.

"If it wasn't for that, you know, it would be... everything would be beauty—"

In his pained expression lies genuine frustration—the creative man wearily navigating the streams of commerce—and some small measure of this, refracted through the intervening decades, may be shared by those who strive to form a coherent picture of Coleman's output during a troubled time.