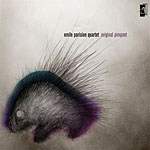 It's almost incongruous to write about Emile Parisien's Original Pimpant, considering the importance of its collective dimension. This is not only about the soprano saxophonist's quartet. Parisien—young prodigy, pupil and proof of the good reputation of France's Marciac jazz school—is not looking for individual recognition here. His is a distinctive approach that's about a collective construction of music; about bringing the purpose of music together, a bit like a theater company writing, staging and performing together.

All the material on Original Pimpant (the title referencing Gustav Mahler) is collectively composed, the quartet sharing the same intelligence with an absolute understanding of the musical text. Highly expressive, the quartet calls for extreme feelings, going from humor to fear, suspense and expectation, sharing the same intensity at the same time. For that reason the music is a thousand miles away from traditional quartets playing chorus after chorus. The aim here is to create a range of strong emotions.

In that sense, "Sanchator De profundis" travels to the highest peaks through a slow progression and the comes down to a more settled limbo. "Darwin a la Montagne" is clearly inspired by Charles Mingus; after the solemnity of "Sanchator," the quartet plays with humor, a little mischievousness and mainly with the unexpected. Musical surprises appear suddenly, created by the injection of furious rumbles. On "Requiem Titanium," tension is created by Julien Touéry's two-note piano ostinato, from which the story is told, and Sylvain Darrifourcq's hammering of the drums. Everything seems to gather around Parisien's meanderings, comparable to a free and powerful electron escaping from this oppressive universe.

The quartet creates remarkable look at Richard Wagner's "Le bel a l'agonie" that's even more obscure than the composer himself. A kind of research into profound depths, into a roaring magma but also the creation of an organized vagueness within this purgatory universe, it demands attention from beginning to end. By taking the music on another level, this quartet is showing audacity and creation, drawing ideas from its musical culture in perfect harmonization.

Whether its musical culture originates from John Coltrane's quartet, Frank Zappa's, or even classical music, Emile Parisien and his quartet develops its own universe with this original syncretism, following the footpaths of the greatest. Beyond his technique, Parisien knows how to attract superb musicians, playing a radically unclassifiable, great music.