BY CHRIS MAY
August 25, 2009
Sign in to view read count
This is the first in a series of articles which will chronicle significant recordings, people and events in the story of Afrobeat, from its inception until the present day.

First up, Alagbon Close by Fela Ransome Kuti (as he then was) and Africa 70 (as it then was), the 1974 album which marked a watershed in the development of the music.

Now in its 25th anniversary year, Alagbon Close is less widely celebrated than the international breakthrough albums Fela Kuti went on to make during the latter half of the 1970s—but it was, nevertheless, an important milestone. The album announced the coming of age of the genre the Nigerian songwriter, vocalist, keyboard player and saxophonist co-created with the drummer and Africa 70 band leader, Tony Allen.

The year 1974 marked a second milestone. In April, the Kalakuta compound Kuti had established for the extended Africa 70 family was raided for the first time, by police looking for weed. Kuti was held for several days, moved between Alagbon Close police station, which was situated nearby, and a military hospital, as the authorities waited (in vain) for him to produce evidence of a swallowed joint. The events were recounted, with savage humor, on 1975's Expensive Shit. Later in 1974, the police, and in early 1977, the army, mounted successively bigger and more vicious attacks on Kalakuta, which will be the focus of the second article in this series.

Wrasse Records' lovingly put together Kuti reissue series pairs Alagbon Close with an earlier release, Why Black Man Dey Suffer. Recorded in 1970, this was one of several albums Kuti made with the participation of the British drummer, Ginger Baker, who was at the time in Nigeria recharging his Cream and Blind Faith-depleted batteries. 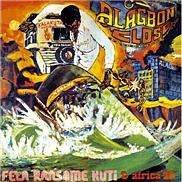 Though preceded by the more-than-promising Gentleman and Afrodisiac in 1973, Alagbon Close, with the benefit of hindsight, marks a quantum leap for Kuti, Allen and Afrobeat. Most of the elements which make the disc so compelling can be heard on earlier albums, but on Alagbon Close Kuti and Tony Allen pull them all together to devastating effect, in the process creating the definitive Afrobeat paradigm.

Well recorded (and excellently remastered), Africa 70 plays with unprecedented fire: the four-piece horn section was never more majestic; the nagging riffs and ostinatos of the tenor and rhythm guitars never more insistent. Allen is a lithe-limbed colossus, his soon-to-be signature rhythms at times pushing the band forward with extraordinary percussive power, at others drawing it back like a coiled spring, only to unleash it again. Three conga drummers support him. Kuti's screaming multi-octave glissandos on the organ climax an incantatory solo, and the track's concluding drums and horns passage is Africa 70 at its most epic.

In what was becoming Kuti's trademark lyric writing style, the title track—sung in the Broken English he adopted to communicate beyond only Yoruba speakers—highlights a particular social injustice to make a broader point. On the title track he bravely exposes the brutality going on in the Alagbon Close police cells. "Dem no get respect for human beings," he sings. "Dem no know say you get blood like dem. Dem go send dem dog to bite bite you. Dem go point dem gun for your face. The gun wey dem take your money to buy. Dem don butt my head with dem gun. Dem go torture you and take your statement from you...." After more in the same vein, Kuti concludes with the observation: "Uniform na cloth na tailor de sew am. Na tailor de sew em like your dress. Nothing special about uniform." 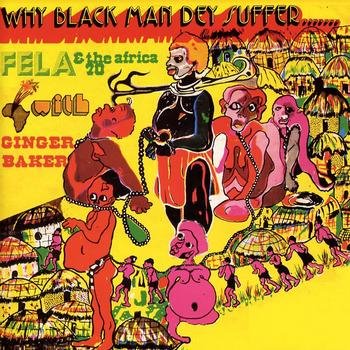 Lyric writing like this, in a country beset by thuggish police and soldiers, provoked ongoing harassment of Kuti and Africa 70. In 1977, during the army's biggest and most shameful assault on Kalakuta, his elderly mother, a revered anti-colonialist, was thrown out of a first floor window by soldiers, hastening her death. Beatings and rapes of band members were common.

Alagbon Close is one of Kuti's greatest discs, establishing a benchmark for subsequent 1970s' classics like Zombie (1976), Sorrow Tears And Blood (1977) and V.I.P. Vagabonds In Power (1979). In late 1975, around the time he rebranded Africa 70 as Afrika 70, Kuti changed his middle name from Ransome to Anikulapo.

Why Black Man Dey Suffer is a more formative affair. It's one of a series of early 1970s' albums which made the transition between the highlife and jazz blend of Kuti and Allen's first band, Koola Lobitos, and the turbulent magnificence of mature Afrobeat. Trumpeter Tunde Williams, baritone saxophonist Lekan Animashaun and first conga player Henry Kofi, from later line-ups including that on Alagbon Close, are also in place. But Afrobeat's signature tenor guitar has yet to be introduced, and, crucially, Allen didn't play on the session, making way for Ginger Baker.

Baker does a creditable job on Why Black Man Dey Suffer, although Allen's absence means Africa 70 lacks the singular rhythms that would come to define Afrobeat a couple of years later. But the album is worth hearing, with powerful lyrics and some strong instrumental performances. A valuable snapshot of Africa 70's foetal stage.

Tracks: Alagbon Close; I No Get Eye For Back.