By Hrayr Attarian
August 30, 2009
Sign in to view read count 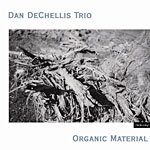 Good ideas need to be expanded upon rather than repeated, since even the best of them may lose their appeal with multiple restatements. Dan DeChellis' Organic Matter is full of interesting musical concepts that are not really explored to their fullest; rather, they are repeated with each track multiple times, creating a pleasant, hypnotic effect that, in the end, remains heavy on form and light on substance.

The exception is the the lengthy "You're So Perceptive," which starts off sounding like a 1970s Blaxploitation soundtrack but, by DeChellis' masterful improvisation on the electric piano, the piece becomes a higher quality '70s fusion number. Here and elsewhere, Herbie Hancock's imprint is obvious, as is a strong western classicism. This is not to suggest that DeChellis is simply channeling Hancock, but more a matter of building his own unique voice through the iconic pianist's influence.

The music is reminiscent of early jazz rock experiments, but with an interesting modern twist. The main soloist is DeChellis but, under his able leadership, bassist Mitch Shelly and drummer John SanFillipo provide sympathetic rhythmic support throughout. The ensemble interaction creates a unique sound as the trio plays off one another; but the musical ideas rarely evolve, instead remaining confined to interesting outlines made up of a few notes.

Some of Organic Material was recorded live, but the sound throughout is impeccable, with audience applause the only telltale sign of the live numbers.

This is a record full of intriguing musical concepts, but the overall lack of expansion robs it of some of its substance and prevents it from becoming a masterpiece of its genre.

Get It While You Can; Path; Device; You're So Perceptive; The Mature Weekend; Organic Material.