By Jay Deshpande
February 17, 2009
Sign in to view read count 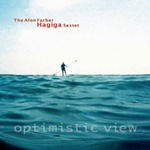 No other way to put it: the Alon Farber Hagiga Sextet is a fantastic find. First formed in 2001 by saxophonist Alon Farber and drummer Dani Benedikt, Hagiga has developed a tasteful interplay while melding disparate musical traditions from around the world. As Israelis, the band-members draw on a heritage of confluence and intersection. Mirroring their nation's geography, Hagiga's sound is at the intersection of north African aesthetics, European jazz, and a distinctly Asian approach to improvisation. Combining this background with the core ethos of their music—"hagiga" is the Hebrew word for celebration—Farber's group provides seven inspiring tracks on their sophomore release, Optimistic View.

Since their 2005 debut Exposure, Hagiga has added another voice—Omri Mor on piano. Playing in dazzling harmony with Amos Hoffman's guitar, Mor fills out the band's sound, but also develops elaborate solos in entirely new harmonic landscapes.

The pianist's talents compliment the band most notably on "Mystic Seven," named for its seductive 7/4 rhythm. The song starts with a grooving, sinister bass line from Hagai Cohen-Milo. Soon a rapturous melody layers over it, involving piano, guitar and the two saxophones to great effect. When the song is stripped back down to its simple bass line for the solos, the fantastic texturing becomes clear: each soloist in turn is given the freedom of a very bare harmonic landscape, so that each can craft his own unique structure. On other songs as well, it seems that part of Hagiga's aesthetic is to create simple, intriguing foundations, and then give the improvisers their liberty to play.

And indeed, play they do. One needs look no farther than Omri Mor's muscular, crashing lines on "Mystic Seven," or the way that Hagai Amir's alto solo on "Zambura" exhausts the rhythmic possibilities of another original groove. "Zambura" is in itself fascinating: a propulsive tune with offbeat hits and all the hard- edged inventiveness of contemporary New York jazz. But at the center of the melody is the oud, the fretless Arab lute (here played by guitarist Hoffman) which adds an entirely new sense to the music. Despite imminent oud players who record on the fringes of jazz (such as Anouar Brahem), the instrument has yet to make its full entry into the realm of jazz improvisation. Hoffman's lengthy solo on "Zambura" brings the oud much closer to that goal, as he plays eloquently on the interstices between jazz and flamenco.

After all these global idioms, it's even more striking when Optimistic View lands finally on "Bird Cry," a slow two-chord groove recalling the best of Al Green. It's far afield from other songs on the album, but remains characteristically hybrid: the chorus features the two horns playing a scale in contrary directions, echoing the simple, visceral melodies of sub-Saharan jazz forms. Such is Farber's brilliance as a songwriter and arranger—he takes the best from each of the traditions he calls upon, uniting a wide array of colors towards the common end of an exciting, celebratory music.