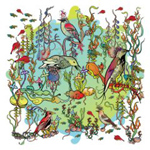 Named after an extinct Hawaiian bird, O'o is the charming follow up to the self-titled debut of composer John Zorn's most accessible project, The Dreamers. Culled from Zorn's inner circle of longstanding collaborators, this all-star sextet of Downtown veterans explores his most tuneful compositions, threading aspects of easy listening, exotica, film soundtracks, surf, and world music into an evocative panorama.

Zorn's recent forays into conventional song forms and traditional structures reveal a softening approach to composition. Though no stranger to melody or harmony, Zorn's musical statements have become more cohesive and predictable over the past few years—the polar opposite of his seminal game pieces, like Cobra, and his most revered band, Naked City. Although the mercurial improvisations of his early game pieces still drive the furious Electric Masada, and Moonchild continues on its nineties-inspired path of metallic destruction, his neo-classical chamber music writing, acoustic Masada projects and ensembles like the recent piano trio featured on Alhambra Love Songs (Tzadik, 2009) offer a more introspective view. Since the dissolution of Naked City in the early nineties, each of Zorn's various ensembles has adopted a distinct identity; Masada has become the standard bearer, while The Dreamers are the yin to Moonchild's yang.

Exploring a range of moods, the sextet invests these colorful miniatures with vibrant lyricism, elevating them beyond mere incidental music, making O'o a delightful, if unsurprising listen.