OK Aurora: Only In Autumn 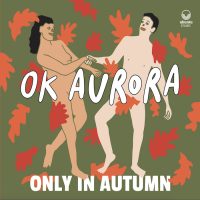 Rod Oughton is a young London drummer with considerable technical proficiency, and a composer and bandleader of promise. With his octet OK Aurora, which prominently features singer Alina Miroshnichenko, Oughton aims to bridge the gap between jazz and what might rather patronizingly be called intelligent pop. Only In Autumn is the band's second release, following the self-produced EP Baby Zeza (2019).

The intelligent pop part of Oughton's equation lies primarily in the lyrics, just under half of which are concerned with love. He seems to have experienced plenty of this, although if the brief synopses accompanying each track title in the liner booklet are anything to go by, he has not always been lucky in it: "100 Secrets" (written after hearing about a friend's infidelity), "Come Clean" (about a time I got it all wrong), "Nina" (the one that got away), "Bittersweet" (a song about memory, and how good memories can hurt the most), "Nothing's Like A New Love" (written in a moment of isolation, looking toward the future). Other songs include "Swipe" (my two cents on smartphones), "The Limit" (a song written about addiction, for a friend) and "Coming Home" (written for London, on the way back from Brazil).

Oughton's arrangements, several of which have Caribbean/South American flavours, factor in plenty of instrumental solos, albeit brief ones, and trumpeter Alexandra Ridout, alto saxophonist Ronan Perrett and tenor saxophonist Dan Smith are names to look out for. Oughton himself solos on just two tracks. An entertaining debut album.