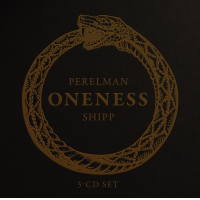 Taking a page from Matthew Shipp's playbook, Ivo Perelman declared the duo's latest release Oneness to be their last. After 2017's The Art Of Perelman—Shipp series and their stellar duo recording Live In Brussels (Leo Records, 2017) release, the pair have crafted nearly three dozen sessions together, including 8 duo recordings. You might have your doubts as to the veracity of that declaration, but judging by this 3-CD box it is the apogee of their collaboration and the culmination of their work which began with Perelman's Bendito Of Santa Cruz (Cadence Jazz Records, 1997).

The title Oneness and the circular ouroboros symbol of a snake swallowing its tail on the cover suggests the infinite cycle of nature's re-creating itself. The nearly 2 and ½ hours of music might best be described as 33 conversations about one thing. The saxophonist and pianist have distilled their approach to music down to this single act of communion. It is as if the pair are repeating the same mantra throughout. Evidence of this is the use of numbers instead of song titles for each track, much like painter Jackson Pollock's later (numbered) work. Sure, they were all created in the same drip-painting manner. Each Pollock was the same conversation about just one thing, and also everything.

The striking feature of Oneness that dialogue is that it is without aggression. Perelman works his signature upper register and, likewise, Shipp mines his (now) distinctive piano language stretching concepts of chamber music and jazz. The improvised exchanges between piano and saxophone (the music was all improvised in the studio) show no hint of indecision. The 33 tracks are brief (in free jazz terms) and perhaps the most sympathetic effort made by an improvising duo in the (gulp) history of jazz.