One Way Out: The Inside History of the Allman Brothers Band (paperback edition) 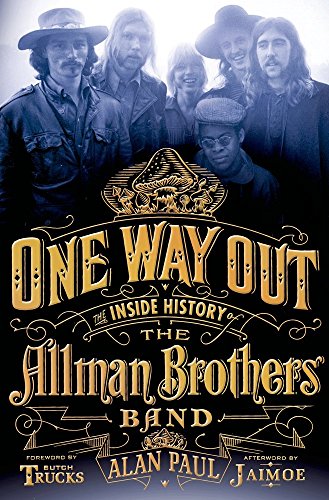 Though Alan Paul may not have intended it as such, his truncated addition to the paperback edition of One Way Out acts as an implicit explanation of why the Allman Brothers' final (sic) performance in October of 2014 was more of an anti-climax rather than a triumphant close to their forty-five year career. To that end and to his credit, the author does an exemplary job of summarizing the sequence of events that led up to that significant event, yet in so doing so, he ends up reaffirming the impression left with the original hardcover publication of "The Inside Story of The Allman Brothers Band," that is, he's a fine reporter, just not an impressive investigative journalist.

Which may or may not surprise anyone reading either edition, whether they peruse his acknowledgments, where he reveals this book was actually borne of an article for Guitar World magazine, or his prologue where he readily admits his perceptions are filtered through that of a fan of the band. Paul has less than a healthy detachment from his subject, so much so that, as well-placed and justified as his loyalty might be, it prevents him from probing far enough into a given topic to reveal the essential details of the matter(s) at hand.

Rolling out the misshapen occurrences that illustrate the chasm between various members of the lineup as it's been constituted since 2000, Paul's essay follows much the same pattern as the body of the book in its original format. That is, the litany of misquotes and miscues that begins with Gregg Allman's January mis-communication regarding bassist Oteil Burbridge's membership in the group becomes progressively less detailed as the essay evolves. Mentions of the canceled solo shows of Allman's and other mishaps including a broken wrist don't lead to details of the incidents themselves or insight on their repercussions in either short or long-term.

It may or may not be representative of guitarist Derek Trucks' cumulative frustration with the group that he's quoted more often than any other member of the Allman Brothers Band during Paul's piece. But it's certainly noteworthy that fretboard partner Warren Haynes, with whom he had to rush out an announcement of their departure (when founding ABB drummer Butch Trucks spoke out of turn of his nephew's exit while on Jam Cruise in February 2014), is noticeable by his absence in this addendum: his measured insight might well be a barometer of the entire band's state of mind during the course of a year when events foreseen and unforeseen kept the Allman Brothers Band from a gracious and grand exit comparable to the best music they made.

To be fair, so much of the melodrama played out publicly during the course of the year, Paul may have simply taken the wiser course and the higher road by not delving into them more deeply. But just as his apparent unwillingness to delve effectively into similar circumstances in the last three years of ABB's history undermined the virtues of his book as originally published-the main attribute of which was the insight he provided into the dynamics of the personnel just before Haynes and then bassist Allen Woody formed Gov't Mule-so does the absence of more behind-the-scenes detail render this added content as comparable to pure public relations.

Along with the somewhat sentimental pondering of the family aspect of the Allmans inner circle, the author's well-publicized round of personal appearances on behalf of ABB (and they with him) , would certainly suggest he has the access he needs to secure more particulars, so what's missing is the courage to risk that access by pushing too far. Fair to say, Paul's conservative choice is an understandable one under these circumstances, except that it leaves a vacuum for an unvarnished account of The Allman Brothers Band's story, particularly in its latter days,

As an antidote to the generalities the author offers regarding various circumstances within the Allman camp that precluded more extensive touring by the band (not to mention calling the final shows into question), it might well have been advantageous for him to offer an analytic approach to the autumn New York shows, four of the six rescheduled from the spring run due to (reportedly) Allman's health ( he missed two Beacon shows and caused the subsequent postponement of the remainder of the dates). Such review, in as fair-minded terms as he can muster, would add weight to his observations as he recounts the elevating impact of Haynes and Trucks' use of the late Duane Allman's guitars during the penultimate concerts. Such an astute approach too would elevate his writing credentials in general.

But even a cursory glance at the discography included here bespeaks a lack of eloquence and insight wanting with One Way Out: The Inside History of the Allman Brothers Band. Kudos to Alan Paul for encouraging a group of often taciturn and not always forthcoming individuals to speak their minds to the degree they do, but, neither he nor they add appreciably their legacy by avoiding a more assiduous effort to investigate the tumultuous events that shortchanged the iconic group right up until they left the stage early in the morning of the anniversary of founder Duane Allman's death.