By Glenn Astarita
September 7, 2007
Sign in to view read count 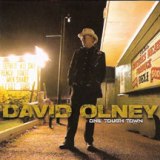 Judging by the CD cover artwork, you might assume that Nashville-based singer/songwriter David Olney is one tough hombre. He's a modern-day soothsayer who pokes some fun at life's circumstances via socio-lyricism that elicits chuckles and contemplation. Highly-revered, Olney combines blues-country and rock amid some ragtag jazz in spots. Nonetheless, he gets his message across with the gait and intentions of a gent who lived the experiences he sings about.

No doubt, Olney surfaces as a man of wisdom here, but his entertaining parables equate to an artist who is clever and keenly observant. On "Who's The Dummy Now, the singer and his band convey a roadhouse-like Dixieland motif, where he communicates an after-hours nightclub groove, littered with empty beer bottles and dank cigar smoke.

Olney's a mystic and means business when he declares his intentions of knocking some sense into the local town-folk. During the low-key acoustic guitar driven "No Lies, he's seemingly writing a love-letter, proclaiming his intent upon drowning his sorrows in whiskey, to complement his opaque delineation between honesty and deceit.

The fun continues on the gospel-hued Delta Blues vamp "See How The Mighty Have Fallen. But the album's secret is uncovered during the country-folk title track, where Olney globalizes the "One Tough Town insinuation into the vastness of planet earth. Witty, humorous and slightly cantankerous, Olney's at the very top of his game.