By Larry Taylor
December 1, 2010
Sign in to view read count 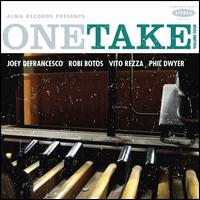 One of the great pleasures of jazz is entering a club to hear expert musicians come together and play impromptu, with no rehearsals. Such a situation is created in One Take, Volume Four.

The sessions aren't planned—DeFrancesco can be heard shouting suggestions before a number and enthusiastically praising results at the finish. And the musicians certainly know each other, intuiting responses in inventive ways. With tracks averaging over eight minutes, everyone gets ample opportunity to stretch out in solos. DeFrancesco is one the most extroverted of organists, and pulls out all the stops on several occasions. The tracks mix ballads, blues, funk, and all-our jamming. Overall, the session is a blast.

After a lovely piano introduction by Botos, the record gets off to a steaming start on "There Is No Greater Love," with a first taste of Dwyer's creative sax work in the hard-driving Joe Lovano tradition.

To cool things down, "Tenderly" follows, featuring the smoky sounds of DeFrancesco's organ and Botos' Fender Keyboard On "Village Green," Rezza's furious drumming leads the group in an up-tempo celebration.

The standout here is "Not That," a DeFrancesco original excursion in down home blues. He starts off with a wallop, his rollicking solo pushed forward by Rezza's marching drums.

With a lot of good jazz fun throughout, here's looking forward to Volume Five.

There Is No Greater Love; Tenderly; Village Green; Not That; Alice In Wonderland; Broadway.