BY EYAL HAREUVENI
December 1, 2010
Sign in to view read count 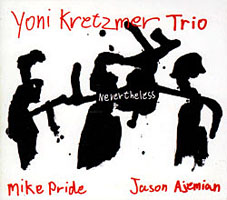 Uprising Israeli-born, Brooklyn-based saxophonist Yoni Kretzmer is a musician well-versed in the rich history of free jazz, without confining himself to any specific genre. In his excellent debut release as a leader, New Dilemma (Earsay, 2009), he featured modern, chamber style compositions. Since than he has led a free-folk quintet in Israel, an Albert Ayler Memorial septet and various free jazz outfits.

With this sax-bass-drums trio release, Kretzmer has chosen experienced and powerful partners—bassist Jason Ajemian and drummer Mike Pride—aiming to fully immerse himself in the free trio format. Kretzmer offers his partners minimally sketched ideas that provide a loose framework for collective interplay.

Even with such loose ideas, the interplay of this trio has an immediate intensity and depth, as if it has been collaborating for years. The playing is direct and passionate, but always nuanced and melodic, never subscribing itself to either common polarity of free jazz—"in" and "out." The trio's mature playing, and willingness to explore and reinvent the sax-bass-drums format, in this instance, is very impressive.

On some of the improvisations, such as "A New Start" and "What a Pity," there is a slow development of an idea by one of the musicians, soon followed and expanded upon by the others, while still following the initial thought. Other improvisations, such as the blow-out "Improv Two" and slow "Till We Got There," balance well between primal tension-building and emotional release. The title track and "Sort of Despair" begin as a collective exploration of basic sounds, and suddenly blossom as restrained, melancholic melodies, the first one as a ballad and the second more upbeat. The ironic "Something with Tango" is close to the European school of free improvisation in its suggestive and sophisticated flirt with other genres.

Looks Like Not; A New Start; Improv Two; Nevertheless; Something with Tango; Four Notes; What a Pity; Sort of Despair; Till We Got There; Four Notes Ending.