Matt Clark Three: One From Brooklyn 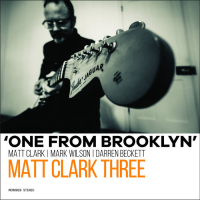 UK guitarist Matt Clark is a seasoned world traveler. In the pandemic year of 2020, he did not let the lockdown keep him from peregrination. He knows that to travel fast, you must travel light. Meaning without baggage, and this trio recording, One From Brooklyn, crosses the Atlantic without leaving his home studio. Clark, a musical omnivore has dabbled in psychedelic rock with Cardboard, new wave eclecticism of CAAW, solo electric music with The Electric Orange and acoustic sounds with Interstellar McCartney.

He builds his studio creation not with Steely Dan-like pristine perfection, but with the grittiness of an urban field recording. "Hey Queens" opens with static fizz and a busking saxophone over a treading bass line. Clark, with the added input of bassist Mark Wilson and drummer Darren Beckett, crafts music as if he were journaling experiences from daily life. Songs include random voices and emergency vehicle sirens, even a train might interrupt a song as it does on "Two Hours That Side."

Don't misunderstand, this is anything but unmethodical music making. Clark is a master at finding rhythms and notes from the memories of his excursion to Brooklyn. "Melancholia" drives a bass/drums swinging affair plus some electronic machinations before the simple guitar lines spun by Clark, along with a trumpet, announce their noir-ish presence. The journey ends with "Last Lost" which pushes a distorted piano against the trio and some sampled end-of-an-LP scratchy fuzz and pop. Let's turn the record over and have some more please.

Title: One From Brooklyn | Year Released: 2021 | Record Label: Self Produced