Michael Lauren All Stars: Once Upon A Time In Portugal 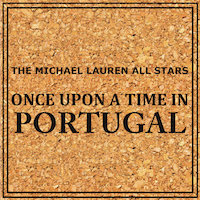 Drummer/educator Michael Lauren moved from New York City in 2003 to become the Professor of Drum Set studies at the Escola Superior de Música, Artes e Espectáculo (ESMAE) in Porto, Portugal. He formed his All Star band with some of Portugal's best jazz musicians to continue performing the hard bop he loves. Almost everyone contributes a tune, along with two period-appropriate covers. The septet stakes out their stylistic territory by opening with "Minor Strain," a Bobby Timmons composition first recorded by trumpeter Lee Morgan on Minor Strain (Roulette Records, 1960). While not often played, it's definitely classic hard bop. Lauren's "Bonfim Blues" is an up-tempo jazz blues which builds to a trumpet/saxophone duel. Saxophonist Jose Menezes' "Outras Viagens" (Other Travel) comes next. As is often the case with this egalitarian group, he gives the most solo space to other players, in this case vibes and guitar.

Vibraphonist Jeffery Davis contributes "Who Said Monopoly Was Fun," which is followed by the other cover in the set, a lovely latin arrangement of Hoagy Carmichael's "The Nearness Of You." Trumpeter Hugo Alves offers the most experimental entry. As its title implies, "Seven Ties Corp." is in seven (alternating with eight), and also has a bit of a Seventies fusion feel, although not so much as to make it sound out of place. "Trains" comes from the pen of pianist Diogo Vida. It starts out slowly—almost making it the ballad of the set—but builds to a fleet guitar/vibraphone dialog. Saxophonist Menezes returns with "Smoking Gun," which he opens playing solo. Finally, guitarist Nuno Ferreira's "Barro E Cal" (Clay and Lime) brings things to a close with more hard bop flair. Carlos Barretto is the only band member not represented as a composer, but mention should be made of his fine contrabass support throughout.

We don't have to take Lauren's word that these musicians are All Stars: their playing and composing proves it all the way through. Exciting music, rooted in the hard bop tradition without being mired in the past. Clearly Lauren's decision to record this quickly—and without rehearsal beforehand—was the right one.

Title: Once Upon A Time In Portugal | Year Released: 2016 | Record Label: Why Not Music