Home » Jazz Articles » The John LaBarbera Big Band: On the Wild Side

The John LaBarbera Big Band: On the Wild Side 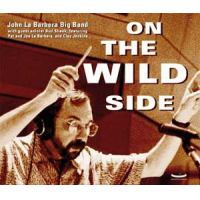 Good things, it has been said, come to those who wait. Well, we've waited a long time for John La Barbera, the middle third of the multi-talented La Barbera brothers, to record his first big-band album, and it's good. Check that; it's better than good—much closer, one might reasonably argue, to spectacular. As a composer and arranger, La Barbera knows how to make a big band swing like there's no tomorrow; one doesn't spend nearly two decades playing and writing for Buddy Rich without learning that. La Barbera has further helped the cause by putting together an ensemble whose rhythm section (on five tracks), plus trumpeter Clay Jenkins and tenor saxophonist Bob Shepard, doubles as the Joe La Barbera Quintet (Bill Cunliffe, piano; Tom Warrington, bass).

Yes, that's younger brother Joe on drums, driving the band relentlessly forward, and older brother Pat on tenor, soloing brightly on five of the nine selections. The rest of the band is a who's who of top-drawer West Coast sidemen who can nail anything La Barbera or anyone else dreams up. The leader even persuaded elder statesman Bud Shank, playing as well as ever at age seventy-five (when the recording was made), to take the album's first solo, on Horace Silver's fast-moving bop theme "Mayreh."

Besides transforming the Beatles' shopworn "Eleanor Rigby" into an ingenious big band tour de force and reupholstering the dramatic suite from Elmer Bernstein's "Walk on the Wild Side," originally arranged for Rich, John wrote the growling "Tiger of San Pedro" (which trombonist Bill Watrous used as the title of one of his '70s albums), the supple "Cachaça Gotcha," mercurial "Cloth of Silver-Threads of Blue" and evocative "Highland Crossing," while brother Joe penned the powerful remembrance of Art Blakey, "Message from Art," to which he, Shepard and trombonist Bruce Paulson have added the exclamation marks.

Pat's tenor is showcased on "Tiger," "Eleanor Rigby" and Miles Davis' "So What," his soprano on "Highland Crossing," and both instruments on "Wild Side." Jenkins solos adroitly on four tracks, trumpeters Wayne Bergeron and Dennis Farias bare their chops on "Tiger" and "Crossing," respectively, and alto Kim Richmond is customarily forceful on "Gotcha."

Worth waiting for? Without a doubt. Horace Silver, who cuts right to the chase, keenly assesses Wild Side in one dead-on sentence on the album's cover: "Good arrangements... good band... good performance." There's not much one can add to that.

Mayreh; So What; Tiger of San Pedro; Message from Art; Walk on the Wild Side Suite; Cacha