By Jack Bowers
January 7, 2018
Sign in to view read count 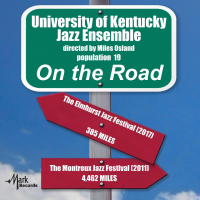 The University of Kentucky Jazz Ensemble was indeed On the Road in recent years, performing the first eight of the fourteen numbers on this impressive album at the 2017 Elmhurst College (IL) Jazz Festival, the others at the Montreux and North Sea (Netherlands) Jazz Festivals in 2011. If you are puzzled by the lack of audience response, that is because the performances heard here were recreated at UK's Singletary Center for the Performing Arts at the close of spring semester in 2017.

Even though director Miles Osland's UK ensembles aren't, strictly speaking, "on the road" here, they do their best to make up for the loss of audience response and spontaneous excitement with enhanced sonics and crisp studio precision. It's a transposal that works quite well, encompassing the opening and closing flag-wavers and most everything in between. The curtain-raiser, Andy Weiner's explosive "When Ya Gotta Go, Ya Gotta Go!" is an old-school tenor war in which Jonathan Barrett and Angie Ortega's "battle of the saxophones" underlines Nick Bolcholz' emphatic drum work and Zachary Robinson's forceful lead trumpet. Ian Cruz plays clarinet behind Ortega's sultry vocal on Juan Tizol's well-traveled "Caravan," alto sax on Bill Holman's "Film at Eleven" and EWI on Russell Ferrante's eloquent "Goin' Home."

Band member Will Stafford's meteoric "Catch Me If You Can" is up next (featuring Stafford on alto, Dieter Rice on tenor), followed by Gordon Goodwin's swaggering "Phat Pack," Holman's gently galloping, contrapuntal "Any Dude'll Do" and UK faculty member Raleigh Dailey's quirky "Stalking the Dread Moray Eel." Cruz solos on baritone on "Phat Pack" (with Rice on tenor) and "Any Dude" (alongside alto Stafford), while Dailey (piano), bassist Danny Cecil and drummer Paul Deatherage form an all-faculty rhythm section on "Moray Eel" and the versatile Cruz solos again, this time on alto, before flexing his muscular tenor on the thunderous finale, Don Menza's lightning-quick "Time Check" (with another serving of stalwart drumming, courtesy of Brandon Wood).

While it would be nice to hear these blue-ribbon charts performed in concert, the UK ensembles are clearly on their game in the studio, and there's not much more a listener could wish for aside from an audience. If these studio tracks exemplify UK's performances "on the road," the audiences in Elmhurst, Montreux and Rotterdam were fortunate to be there.

When Ya Gotta Go, Ya Gotta Go!; Caravan; Film at Eleven; Goin’ Home; Trombone Institute of Technology; The Peacocks; Metroliner; Blues and the Abscessed Tooth; Blues in Hoss’ Flat; Catch Me If You Can!; The Phat Pack; Any Dude’ll Do; Stalking the Dread Moray Eel; Time Check.