BY FLORENCE WETZEL
March 16, 2009
Sign in to view read count 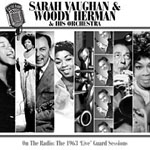 This unique CD brings together Sarah Vaughan and Woody Herman, two of jazz's strongest talents. Shortly after a studio recording made together under Vaughan's name, the pair joined forces in 1963 for a series of radio programs called "The Guard Sessions," which were sponsored by the US National Guard as a tool for recruitment. On the Radio: The 1963 "Live" Guard Sessions was culled from these programs and features eight songs with Vaughan backed by Herman's orchestra and eight songs with just the orchestra, including one with Herman himself singing.

In order to retain the original flavor of the radio show, the collection includes some of the scripted banter between Vaughan, Herman and DJ Martin Block. Although the repartée verges on the goofy, it's fun to get a sense of their personalities, particularly Herman's exceedingly dry humor.

As for the music, it's delectable. By 1963, both Vaughan and Herman were thoroughly seasoned performers with flawless chops and unbeatable credentials. Vaughan's voice is as luscious as ever, and Herman was playing with the latest incarnation of his "herds," known as "His Swinging Herd." This group included noted soloists Bill Chase on trumpet, Phil Wilson on trombone, and Sal Nistico on tenor sax, with Herman in fine form on clarinet and alto sax. Highlights include "Day In, Day Out," a cheerfully swinging tune showcasing Vaughan's smooth, honeyed delivery. Vaughan is just as compelling on "But Not for Me," her easy, natural phrasing and beautiful range complemented by Herman's orchestra, which utilizes just a few instruments in order to give Vaughan plenty of space. The Swinging Herd also shines on its own, particularly on the bold and bluesy "Mo-Lasses" as well as on "Muskrat Ramble," where they cut loose with their precise and powerful sound, featuring an impeccable frontline.

It's a treat for jazz fans when gems are unearthed from musicians who are long gone. This is certainly one of those rare pleasures, and the inspired combination of Vaughan and Herman only makes the listener wish for more.

Introduction and Go With The National Guard; Day In, Day Out; Advert & Talk; Midnight; But Not For Me; Muskrat Ramble; Conversation and Introduction; Don't Get Around Much Anymore; The More I See You; On Green Dolphin Street; At The Woodchopper's Ball; Just One Of Those Things; Don't Go With Strangers; I'll Be Seeing You; Four Brothers; Mo-Lasses; I Cried For You; Poor Butterfly; The Preacher.