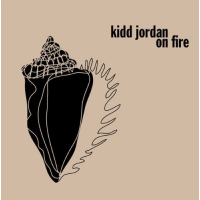 Incendiary similes have always proven popular as descriptors of free jazz. Indeed, "Fire Music," has been used as a label for the whole genre. New Orleans-based saxophonist Kidd Jordan's 2006 outing, the superb Palm of Soul (AUM Fidelity), essayed a meditative calm, music which couldn't be more different from the accurately named 50-minute studio session On Fire. While bassist Harrison Bankhead and drummer Warren Smith would be eminently suited to a contemplative, even melodically inclined date, here they too pursue more rough-hewn ends.

As customary for Jordan, each cut is spontaneously created, relying on the participants' quick wits and instincts honed over 55 plus years of activity in not only avant jazz, but also, as in the case of Jordan, stints backing R&B royalty like Ray Charles, Aretha Franklin and Stevie Wonder. Jordan's signature falsetto wail—an uncompromising but deeply felt sound—permeates each track although the resultant blowing is more than one- dimensional. He spikes his unbridled expression with insistent riffs or reflective codas, around which his colleagues rally and create emphatic conclusions. On "We Are All Indebted To Each Other," the combination of both approaches, with a beautiful luminous tone, makes for a strikingly affecting conclusion.

Smith's artistry is orchestral in scope, demonstrating mastery of timbre and rhythm. He effects an inspiring change of pace when he switches to shimmering vibes. Bankhead deploys a deep buzzing thrum, like a hive of bees, best heard in an extended flickering feature towards the end of "The Evil Eye," when he evokes flamenco stylings. He gets a name check all his own on the soulful "Harrison Carries Out the Coffin" where he accompanies another fleet-fingered solo with a melodic hum, leading to a richly bluesy Second Line finale.

Jordan and his band burn brightly, their blend of joyous abandon and searing intensity prove hard to beat.

Officer, that Big Knife Cuts My Sax Reeds; The Evil Eye; We Are All Indebted To Each Other; Harrison Carries Out The Coffin.