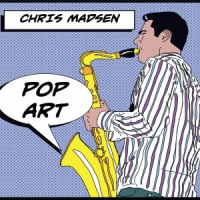 Freedom of musical form is one of the many beauties of jazz. Jazz musicians express themselves through improvisation over musical structures that they can alter at any moment, shifting through different meters, timbres and harmonic landscapes. However, musicians run the risk of becoming too self-invested when they engage in long-form improvisation. In those unfortunate instances when improvisers begin to neglect the audience or their fellow band mates, the freedom that makes jazz such a potent musical product becomes a nuisance, diminishing what otherwise might be a tremendous display of virtuosity.

What is the right length for a solo? A song? How about the right number of distinct melodies and grooves that can be incorporated into a tune before it oversaturates the audience's ears? Chicago tenor saxophonist Chris Madsen offers a compelling and rather effective way of dealing with these issues on Pop Art

The album, consisting entirely of Madsen's original compositions, is structurally pop but harmonically and rhythmically jazz. Most songs have clearly defined verse and chorus sections and short solos serve as bridges in the form. The duration of every track is less than six minutes and many last for less than five.

Such pop song structures have two major benefits. First, since Madsen is an incredibly melodic player, the extended focus on specific melodies highlights the leader's brilliant lyricism. Madsen's phrasing is clearly influenced by traditional cool school saxophone players like Lester Young, but he takes a decidedly modern approach both tonally and harmonically. This contrasting combination lends a sophisticated, but not overly analytical sound to his composition and soloing.

Secondly, the brevity of the solos forces the musicians to play only their most melodically satisfying ideas and avoid extensive harmonic expansion. As a result, the overall playing is catchier than the typical back-to-back lineup of multi-chorus soloing, making uninterrupted engagement with the tracks very easy indeed.

Pop form should not be mistaken for simplicity or monotony, however. Madsen shows that he is a dynamic composer and the album's tracks avoid stylistic uniformity. The title track shifts between a spacious straight-eight feel and a dense slow swing, allowing both Madsen and guitarist Scott Hesse to demonstrate their cool finesse. "Count Me In" powers forward, driven by drummer Eric Montzka's tight shuffle, and both "Song for the New Decade" and "Money Rollins" are self-confident swingers. The less traditional tunes include "Commando," a series of dreamy melodies set to a martial drum beat, and "Another Mystery," an ethereally textured tune propelled by Michael Raynor's dark cymbal work that channels much of the sound of guitarist John Moulder.

Madsen interacts with a flexible rhythm section to make an energetically refreshing album that never sounds heavy-handed. Pop Art is a fun listen and its conciseness makes the disk very accessible; a great contrast to modern avant-garde releases.