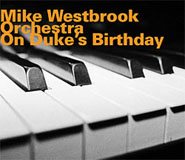 Among the most characterful and singular British composer/bandleaders, Mike Westbrook is revered by the relative few who follow his music, but is woefully under-appreciated in the wider jazz world. In part, this is because Westbrook paints on a larger canvas than that used in most "conventional" orchestral jazz, frequently taking on projects with textural themes or dramaturgical production values. In part, it's because he is politically engaged and, starting with the early anti-war masterpieces Release (Deram, 1968) and Marching Song (Deram, 1969), has regularly composed works with overt political messages.

Westbrook doesn't quite qualify as Britain's best kept jazz secret—that honor falls to Tony Haynes and his Grand Union Orchestra, whose sui generis big band music also presses too many cross-artform buttons to be easily embraced by jazz critics, the music business or the wider media—but his and Haynes' situations are analogous.

On Duke's Birthday, a 1984 concert recording originally released on HatART as a double-LP in 1985, is one of Westbrook's most straight-ahead, "pure music" albums. 1984 was the tenth anniversary of Duke Ellington's passing, and Westbrook was commissioned by the Temps Du Jazz festival in Amiens, France to compose a work to mark the occasion. While there are Ellingtonian echoes—signature Ellington soloists trumpeter Cootie Williams, trombonist Tricky Sam Nanton and baritone saxophonist Harry Carney, for example, are occasionally evoked—there are probably no more than can be heard in most post-Ellington large group jazz. The album is no pastiche or revival—it is instead an exposition of Westbrook's own sumptuous and detailed writing and his genius, shared with Ellington, for hard-wiring soloists into the bigger picture.

The five individual pieces making up the suite typically start with simple, three or four note motifs, which are developed and reconstructed by a constantly evolving succession of orchestral voicings, rhythm shifts and solo passages, the latter written into the arrangements by Westbrook rather than left open-ended. Dominique Pifarely (violin), Georgie Born (cello), Chris Biscoe (saxophones), Danilo Terenzi (trombone) and Brian Godding (guitar) are amongst those shining memorably.

There are wistful moments, like those beginning "On Duke's Birthday 1" and "2," but the abiding mood is one of joy and celebration—reaching its peak during the second half of the 21-minute "East Stratford Too-Doo" (the punning title presumably giving a nod to the radical, long-surviving Theatre Royal in London's deprived Stratford East neighborhood), and its exuberant solo passages for Pifarely, Biscoe (on alto saxophone) and Terenzi.