Home » Jazz Articles » Ton Trio II: On And On

Ton Trio II: On And On

By Glenn Astarita
February 28, 2014
Sign in to view read count 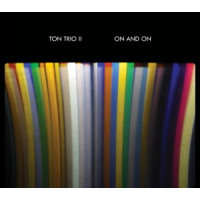 Oakland, CA, based jazz and improvisation protagonist, alto saxophonist Aram Shelton could hold his own with most anyone in a cutting-contest. But there's more than a whole lot of technical acumen taking place with Ton Trio II. One of the principle selling points so to speak, is how the musicians impeccably integrate the modern jazz vernacular with invocative avant-garde campaigns, heaving with impact and intensifying discourses.

The trio's spry and spunky demeanor is led by Shelton's burly tone and fluent phrasings amid a search and conquer manifesto. On "Orange Poppies," the band whirls through—with the greatest of ease—a complex bop-drenched time signature as Shelton ignites a firestorm. Here, bassist Scott Brown primarily operates within the upper-registers to incite a sense of urgency, where the band lashes out with sizzling choruses, sparked by Shelton's amazingly fast flurries and gruff accents. He circumnavigates many of the rhythmic components executed by drummer Alex Vittum's crackling pulses and polyrhythmic attack, along with solos that convey poetic qualities.

The band's concentrated focus is keenly disassembled in certain movements as they loosen the vibe with free-form escapades of various hues and cadences. But the quasi, jazz-waltz oeuvre "Let's All Go," is a solid forum for Shelton to deliver John Coltrane-like chromatics via searching notes during an extended bridge as he restates and darts around the main theme, anchored by the rhythm section's blustery grooves. However, Vittum explodes with a rough and tumble solo, gushing with regimented maneuvers; fancy footwork on the bass drum, and dizzying geometrical patterns as the band closes by punching out a snaky unison chorus. Otherwise, Shelton communicates isolation and reflection on the ballad "Findings," ramped up by a mid- tempo jaunt, dyed with a harrowing storyline. Hence, the musicians' self-perpetuating cycles of enthusiastic interplay engulfs the dynamically moving parts. Indeed, a blockbuster production.

This Reminds Me; Orange Poppies; We Were Told; On and On; Let’s All go; Layover; Freshly Pressed; Findings; Turncoats.

Title: On And On | Year Released: 2014 | Record Label: Singlespeed Music