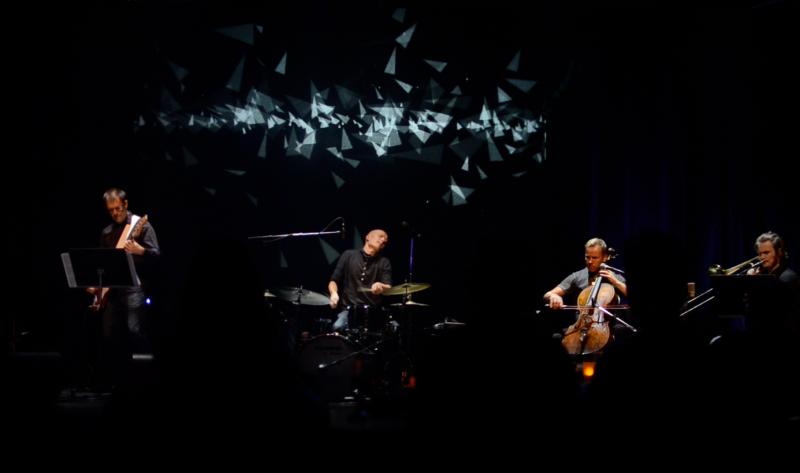 BY ANTHONY SHAW
December 6, 2011
Sign in to view read count
Oddarrang
Louhisali
Espoo, Finland
November 18, 2011
Finnish drummer Olavi Louhivuori and his band Oddarrang returned to the stage with the sparse chamber-style jazz from their second album in the elegant setting of Espoo's Cultural Center, just outside Helsinki. As expected from a group whose debut album was released four years previously, and with only a few gigs in the ensuing years, this performance was concentrated if not tenuous to begin with, but consolidated as the evening progressed.
With all musicians except Louhivori hunched over their stands, it was clear this music was more reverential than reverberant. Their style of largely acoustic experimentalism, laid down with Music Illustrated (Texicalli, 2007), featured pieces written by Louhivuori, but introduced and led by clear melody lines played almost in rotation by all four instrumentalists. The mix of acoustic timbres, particularly trombonist Ilmari Pohjola and Osmo Ikonen's cello, contrasting Lasse Sakara's clean electric guitar, determined the dynamic within the band, with only muted tension or interaction between the musicians. While it was clear that this band has one collective foot firmly in a classical shoe, space for the individual expression was clearly available.
"Prayer," the opening number of both Oddarrang's new CD, Cathedral (Texicalli, 2011), and this concert, indicated that the new material offers a clearly spiritual dimension, if names are any indication of intent. This may reflect the fact that the music was written and recorded around the time of the birth of Louhivuori's first child, to whom this album is dedicated (along with his wife, singer Emma Salokoski), or it may just be that slow tempos, contemplative themes and modest use of electronics are the features which the leader highlights in his music, just as he did with the first album.

With the same line up now for six years, this quintet's sound is surprisingly free of strong rhythms, instead dominated by the flowing melody lines from everyone excluding Louhivuori—cello and trombone to stage right, bass and guitar to the left. Two exceptions were "Prayer" introduced by Louhivuori at the piano, and Ikonen's "Funeral" led by a prerecorded church organ and whose powerful climax demonstrated that this band can stretch out and rock, but it is not their primary intent, and in this respect bears comparison with that of trumpeters Nils Petter Molvaer and Jon Hassell.

With the dynamic within a band so restrained, music may become merely accompaniment to another experience—typically a visual one, real or imagined. Louhisali's first-class projection facilities were well-utilized in the meditative backdrops produced by the collective OiOi (a Finnish expression roughly translating as woah). Slowly evolving naturalistic horizons, subdividing grids or glimmering astral vistas— all in shades of black and white—were inspired images reminiscent of film director Stanley Kubrick's awesome visuals in his 1968 masterpiece, 2001: A Space Odyssey. Abstract and ever evolving, these intriguing images clearly matched the contemplative, sacred approach to music-making offered by Louhivuori and Oddarrang.