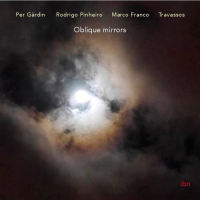 Listening to the free improvisation recording, Oblique Mirrors brings to mind a most memorable line from the film The Usual Suspects, where Kevin Spacey as Roger "Verbal" Kint says, "The greatest trick the Devil ever pulled was convincing the world he didn't exist. And like that, poof. He's gone."

Maybe its the evanescent nature of instant composing that evokes the "can't step in the same river twice" maxim, or maybe the sound experience of such a delicate recording as this, is asking you to live in the moment. Luckily, this is a recording and not concert. Listeners can return to the sounds over and over

The Oblique Mirrors recording may be ephemeral, as this was a meeting between the Swedish saxophonist Per Gärdin and the Portuguese players, Rodrigo Pinheiro, Marco Franco, and Travassos in Lisbon, 2014. This unique Swedish/Portuguese collaboration brings together Pinheiro, the pianist for RED Trio, Franco, the drummer for Rodrigo Amado's Lisbon Improvisation Players, and Travassos, who has manipulated electronics for Luís Lopes.

The reference point here is to Evan Parker's trio. Gärdin is a talented saxophonist, with two compelling solo recordings, in situ (IBN Music, 2010) and Loos (IBN Music, 2012). He is able to effortlessly apply that wavy/squiggle Parker sound to his extended technique arsenal.

While Gärdin may be the unconscious focus here, the persuasive playing of his partners shapes the recording. Pinheiro's piano, whether he plays the insides or out, is the rhythmic and percussive backbone of the recording. Franco and the minimal electronics of Travassos supply the frosting. Impressive stuff here.