By NENAD GEORGIEVSKI
December 8, 2016
Sign in to view read count 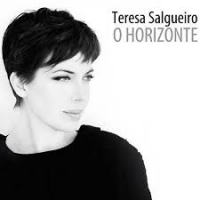 There have long been two sides to singer Teresa Salgueiro's musicality: the first as a master interpreter of a song and the second a gifted songwriter. Ever since Salgueiro left the band Madredeus after 20 years of recording and touring she began a career where she first gave emphasis on covers and guest appearances but soon she blossomed into a serious and distinct songwriter. After three decades as one of the most distinct world chanteuses, what's most heartening is that singer Teresa Salgueiro is not only making some of the finest music of her career at a time when many artists would be treading water, but she has confounded expectations at the same time. With her outing O Horizonte, she shows that she's singin and writing at the top of her game.

The release of O Misterio marked the beginning a new chapter of her career and no wonder she herself sees it as her real debut record unlike the multitude of cover records she had made prior. O Misterio revealed such a depth of songwriting talent that one felt why not putting her mind to it earlier. O Horizonte not only confirms her songwriting talents but takes the music and the talent further and deeper.

From the opening title track right through to the closing "Entradecer" what is evident is that this a hypnotic collection of evocative, yet sparsely orchestrated tender songs that move along with a subtle and undeniable ease. This record has a sense of completeness and integrity. Enveloped by a unique atmospheric sound and melodies, it's her vocals that serve as a main melodic instrument. Salgueiro's vocals resonate with a poetic passion. One moment it sounds delicate and fragile and the next she gives the impression that a tremendous power is going to be unleashed.

The opening track exemplifies the album's sublimity and unearthly feel with its ambient/classical feel and sets the tone for the rest of the record. "Desencontro" is where the ambiance and the mood start lifting up. The sparse arrangements rely on quietly bubbling accordion, melodic guitars with intermittent percussion added for depth, not drive. "A Cidade" and "Instante" are tender ballads on which Salgueiro merges surrender, tenderness, and confidence.

These songs resemble the melodicity and the tender nature of one of Madredeus' finest moments "O Espirito Da Paz." The acoustic instruments, the melancholy, the strikingly intimate and vulnerable voice within the songs do recall the feel of this very fine record. This is best felt on tracks such as the heart rendering "Maresia" and the gorgeous "O Vento." On "O Vento" she is backed by a pulsing accordion and a lilting guitar the song's melody swirls and twists gently and unobtrusively. But the sparse arrangements and the harmonies overall tell a different story as the songs she has written emphasize the beautiful tonality of her voice. With her band, she is able to create aural portraits of love, loneliness, brokenness, devotion, and alienation.

"Exodo" is a song that reflects the horrors of refugees in the recent refugee crisis when Europe was flooded with Syrian refugees. Starting with sounds of guns and war, Salgueiro's band paints a melancholy aural canvas while her singing exhibits a heartfelt depth. There is an elegiac quality to her voice on "Ceu" and the music matches the melancholy of her lyrics and vocals. Not everything is melancholic and subdued. "Libertade" is a playful song where the band's deft touches emphasize how well they are attuned to her vocal dynamics. The album closes with "Entardecer" or "Eventide," a light song that describes a summer evening and closes with the sounds of church bells. Again, it's her voice that acts like a wildly expressive instrument that cajoles, swoops, breaks hearts and turns these songs into gold.

Each song feels like a wave where they slip effortlessly into the next, taking the listener on a journey of subtly shifting moods. The album's acoustic and ambient textures manage to sound both recognizable and fresh. If the melodies and the arrangements nod politely to Madredeus, the space in the production and the unpretentious artful feel of the songs reflect an intelligence and craft rarely heard anywhere. O Horizonte is a special recording that showcases Salgueiro's newly found maturity and great artistry. It's an enchanting and delightful recording.