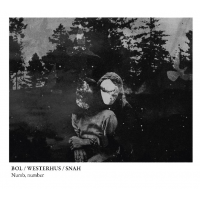 On this recording, four years after Skylab (NORCD, 2008), Bol is joined by two extremely creative and unorthodox guitarists— Hans Magnus Ryan (known as Snah), from seminal Norwegian band Motorpsycho, and Stian Westerhus, known for his impressive solo outing Pitch Black Star Spangled (Rune Grammofon, 2010) and as a member of Nils Petter Molvaer's trio. This quintet performed first at Trondheim Jazz Festival in 2010, and the praised performance has culminated in this recording.

The seven compositions vary in nature. All stress the lyrics and are structured as mini-suites. "Numb, number" evolves slowly and gently around the vocalist's expressive recitation of her poem. Åse's vocals and Storløkken's spare electronic sounds embraces the poetic images of e.e. cummings' "Spring is like a perhaps hand" with a perfect, corresponding cinematic sonic envelope.

"You bird—," after a poem by modern Norwegian poet Rolf Jacobsen, has a grandiose, powerful arrangement, similar to the recent collaboration by Motorpsycho and Storløkken on The Death Defying Unicorn (Rune Grammofon, 2012), with the distinctive sounds of the two guitarists placed upfront. "Waiting Time," based on another Jacobsen poem, develops patiently. Åse plays with the poem, while Westerhus' sustained guitar lines and Storløkken's psychedelic synthesizer sounds engulf her fragile, nuanced reading.

"The Western Wind," also after Jacobsen poem, is a compact prog-rock symphony, governed by Åse's warm, soaring vocals and improvisations. She is aided by the twin-guitar power chords and Storløkken and Haugerud's electric storm. "Asphalt," using another Jacobsen poem, has a spare, threatening soundscape that stresses Åse's delivery of the poetic content concerning the danger of authoritative regimes.

"Singing Again," from a poem by Norwegian port Olav. H. Hauge, is a hopeful, love message to the beautiful nature around us. The poem is performed with an emotional, melodic and delicate arrangement—a fitting conclusion to this magnificent journey in sound and poetry.