By Glenn Astarita
September 9, 2021
Sign in to view read count 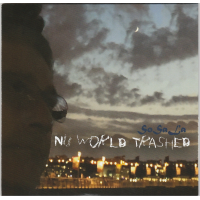 Per the press release, saxophonist, vocalist SoSaLa (Ornette Coleman, Salif Keita) is the abbreviation of his birth name, Sohrab Saadat Ladjevardi. He's a Swiss-born Iranian American and a well-known activist, educator, author and the president of Musicians for Musicians (MFM) who exhibits complete command of his saxophones during two live tracks and seven studio tracks, recorded between 2014 and 2020. As the title describes, the music draws inferences to the "Nu World" created by the Internet, and how some may feel 'trashed' by it. Ultimately, the artist projects a sensibility that music is a healing force and transcends the noise and angst of the modern era amid some socio-political iterations and activist, educator, Dr. Cornell West's thought-provoking spoken word on the protest song "Enough is Enough."

To some extent, the leader presents an a la carte program of how jazz can be an additive or enhancer to worldly modal practices abetted by his dynamic use of vibrato, silky smooth overtones, and gruff outbreaks. Moreover, various musicians appear on select tracks such as Mike Irish and Hubi Greiner who use electronics—programming, in concert with arranging and mixing skills and Baba Don Eaton, handling the percussion duties among several others who help generate new wave EFX, blues, dub, Middle Eastern stylizations or folk-like etudes into the disparate mix.

"Anybody Out There?" opens with the musician named Genetic Drugs' silvery synth lines along with sirens in the background, evolving into a slow tempo funk vamp, tinted by SoSaLa's resonating tenor sax grooves, painted with mystical qualities, and underscored with Middle Eastern tonalities. And the low key "What What?" was recorded live in New York City and features his beat-poet like spoken word. Whereas the extended piece "My Shutter" is framed in Persian classical music and features David Shively who plays the Hungarian cimbalom, conjuring notions of the band performing a mantra in a forbidden forest. Here, SoSaLa casts ethereal attributes via his reverb-tinged, fluent, staggered, and circular soprano sax phrasings, plush with a velvety sheen. Overall, the saxophonist jubilantly radiates a third-world spirit, brimming with urban soundscapes.