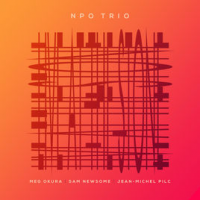 Recorded during her week-long residency at The Stone, New York, in 2016, on NPO Trio—Live at the Stone violinist Meg Okura and her colleagues, pianist Jean-Michel Pilc and soprano saxophonist Sam Newsome, produce a captivating hour-long set of music. Newsome and Pilc have performed with Okura's Pan-Asian Chamber Jazz Ensemble, and the two worked together on their 2017 duo release Magic Circle. Due to their substantial shared experience, the three musicians have an instantly-apparent rapport, with a synthetic vision that provides impressive cohesion and focus, despite the fully-improvised nature of the performance.

The album consists of three improvisations, the first a 38-minute extravaganza that covers a wide range of emotional and stylistic registers, with its central touchstone being a nineteenth-century Yiddish folk song by Mark Warshawsky entitled "Oyfn Pripetchik." The tune's poignant simplicity is perfect in allowing the trio to branch off in multiple directions over the course of the piece, yet still draw from a shared vocabulary when needed to ensure that the freedom stays bounded. Although the piece is divided into six separate tracks on the album, it is really a continuous work that demands sustained attention from beginning to end; this isn't a recording to be enjoyed by shuffling the tracks.

In addition to the piece's intrinsic beauty, it is also a vehicle for each musician's distinctive attributes. Okura is adept at offering leading or complementary roles as needed; she has the lyrical qualities needed to carry the melody, but she's just as comfortable with gentle pizzicato phrases or rhythmic interjections that serve the music rather than highlighting her prodigious technique. Newsome's facility on soprano sax allows him to use multiphonics, circular breathing and other striking effects that add intrigue and dynamism to the music. And Pilc is a marvel, with a delicate touch during the music's restrained moments but a rich, stentorian delivery during the emphatic ones. His two-handed facility is especially remarkable, with multiple figures developed simultaneously on "Bells, Whistles and Sirens," the piece's second segment.

In the same way that "Oyfn Pripetchik" provides the key reference point for the main piece, "Unkind Gestures" allows the group to tease out some extemporized reflections on John Coltrane's "Giant Steps." Newsome's extended techniques are quite well utilized here, and the trio delivers an energized and imaginative rendering with just occasional gestures to the original song's structure.

The album is concluded by another lengthy improvisation, "Yiddish Mama No Tsuki," an opportunity for Okura once again to venture into Jewish folk music, but this time by combining it with a similar Japanese tune that allows the group to straddle both cultures, and then add a third, with an engaging segment employing a tango rhythm. It's an appropriate finish to an album that offers such an inventive, expansive approach to music-making.