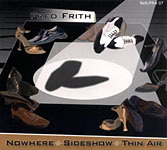 His sixth album of music for dance, Nowhere / Sideshow / Thin Air continues multi-instrumentalist/composer Fred Frith's longstanding collaboration with Carla Kihlstedt. The violinist was heard most recently on Frith's previous dance disc, The Happy End Problem (ReR Megacorp, 2006), and in performance as part of his well-received Art Bears Songbook, with Art Bears percussionist/lyricist/co-founder Chris Cutler, and Cosa Brava, a new rock-oriented group with a debut disc due out in 2010. It's clearly a fruitful relationship that has seen the intrepid duo explore everything from the avant-tinged to the painfully beautiful. Even when he's being lyrical—as he seems to be more often than not lately— Frith skews his music to the left of center; distinctly personal even when eminently hummable.

This is no surprise from a co-founder of British group/Rock in Opposition progenitor, Henry Cow, whose 40th Anniversary Box Set (ReR Megacorp, 2008) was an overdue expansion of the limited perspective its original recordings provided. Cow may have been compositionally dense and improvisationally unfettered, but it was also capable of memorable if oblique melodism, and Frith's inherent stylistic eclecticism has only matured with time.

Nowhere is the disc's most angular suite, with Kihlstedt's participation more spare; often buried within Frith's layers of guitars, bass, keyboards, samples, percussion, and voice. From the industrial to the ethereal, this series of miniatures draws from overtly musical sources and sonics from farther afield—"found-scapes," as Frith calls them.

Even when this music isn't to be felt more than heard, Frith refracts beauty through an unpredictable prism. Sideshow leans more decidedly towards the melodic, though constructed from contrapuntal layering. On "clearing the throat," Frith playfully exchanges classical guitar lines with Kihlsted over a melancholic but unpredictable electric guitar drone, spare percussion, and sampled sounds. Even more immediately compelling, the fugue-like "show time" is an ebbing-and-flowing piece for two violins (he joins Kihlstedt on "low-grade violin"), acoustic guitar, and piano. Only the dryly humorous Frith would include Kihlstedt's performance gaff (or is it?); the violinist apologizes as the piece continues—trying, it seems, to find its feet but only doing so in its final few seconds.

The only dance score that doesn't involve Kihlstedt is Thin Air which, with violinist Hande Erdem and cellist Theresa Wong, suggests—and delivers—a chamber-like intimacy, but no more so than the rest of this genre-busting disc that catholically references a variety of styles, but ultimately transcends all of its sources. Most unexpected is the closing "fast feet," a rocking miniature that, more than anything else, hints at what might be to come with Cosa Brava. It's never a bad idea to leave your audience hungry for more, and as full a program as the 77-minute Nowhere / Sideshow / Thin Air is, its prescient ending does just that.

Nowhere: to run; near; to be seen; else; can compare; getting; going; to hide. Sideshow: clearing the throat; show time; on or in the wing; act two; angels with thirty faces; in which all may have been revealed; ghost of BB; Ms. Mac drinks and goes home. Thin Air: ladders; screened; plastic; running; falling; fast feet.