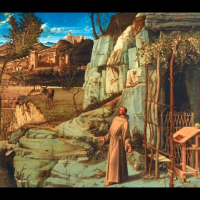 Those who admire Spanish guitar music will greatly appreciate the beautiful airy set of compositions on Nove cantici per Francesco D'Assisi by John Zorn. Zorn, best known for his challenging, cerebral and complex avant-garde offerings, conjures up a set of pastoral tunes composed as part of a residency at New York's Frick Museum. The tunes feature the delicate interplay of a trio of guitarists, Bill Frisell, Julian Lage, and Gyan Riley.

Some may be surprised that Zorn could write such beautiful music. Like an abstract expressionist painter whose work is questioned because it does not conform to representations of nature, avant-garde improvisers are often faced with critics who ask can they play "real" music? Those who listen to Zorn know that he not only can play all types of music but does so with a high degree of virtuosity and creativity. With this album, Zorn has stepped out of the jazz lexicon altogether into a more folk flamenco style and he offers up musical interpretations of adobe villages nestled in valleys under snow-peaked purple and brown mountains.

Not all is happy and sunny though. "Sister Death" has a plaintive, mournful, somber and dark quality about it. The taut dissonant playing implies some painful remembrance. Contrast that with the medieval dance of "Laudes Creaturarum," a sweet rambling number which makes one feel a part of some long ago Elizabethan ball. Then there's the snow-driven "Nativity," where off-beat rhythms are juxtaposed against a theme of great beauty. "Poor Clares" has a longing in it, like recalling the glowing embers of a past love.

"Le Laudi" features strong guitar attacks over multiple time signatures—a matador waving his cape boldly in the harsh sunlight. "Mother Earth" recalls butterflies and flowers in a verdant meadow. And "Meditations," which concludes the album, has a dreamy quality to it, like staring through a portal at a field in the late afternoon sun.

The guitar-playing here is especially noteworthy. The trio perfectly captures the mood of the pieces and gives the compositions a mix of nuance and accent which brings feelings to life. Zorn does not play on the album but he has chosen his cohorts well. The intoxicating and moving blend of Nove cantici per Francesco D'Assisi will inspire.