By KARL ACKERMANN
November 23, 2016
Sign in to view read count 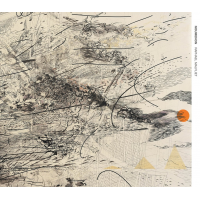 Belgian-born bassist Raphael Malfliet graduated from the Conservatory in Antwerp in 2014, moving to New York shortly afterward. Though the music on his debut trio album Noumenon is outside of well-defined genres, his influences of modern classical and improvisation are evident from the start. One is as likely to hear traces of Elliott Sharp as they would be to hear the micropolyphony of Gyorgi Legeti.

The trio consists of Malfliet, guitarist Todd Neufeld and drummer Carlo Costa. Neufeld has been a presence on a number of albums but most notably, had been an integral part of Tyshawn Sorey's Koan (482 Music, 2009) and Oblique I (Pi Recordings, 2011). Neufeld and Costa recorded together as part of the drummer's thirteen-piece ensemble, Acustica, on the album Strata (Neither/Nor Records, 2015).

The original compositions are tonal experiments where these conventional instruments rarely sound as would be expect. "Kandy"—at almost eighteen minutes—washes across the landscape with gently rolling drums, bowed strings and shimmering chords. Malfliet shatters that meditative mood with "My Name" a mélange of spoken word and industrial noise. "Arcana," while tonal in the vein of the opener, mixes in more traditional instrumental properties, all at an unhurried pace. "Kort," the shortest piece on Noumenon at barely two minutes, is also the most overtly melodic, though still off-kilter.

Noumenon is an appealing collage, sometimes spacious, other times encased in an abstract world of unfamiliar sounds. Malfliet effectively moves in and out of dissonance, improvisation and fragmented melodies never leaving the continuity far behind. But this is not a collection for those who need to arrive at a specific destination; it is one for those who appreciate the new and strange discoveries along the way.