Nothing but Love in God's Water by Robert Darden 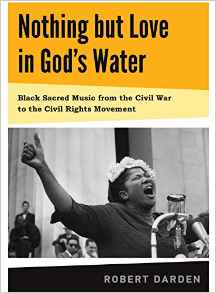 Critic Ed Ward's The History of Rock & Roll, Volume 1: 1920-1965 (Flatiron Books, 2016) is a history written with a very even and broad horizon in mind. Bigger than the blues, country, and soul: rock & roll is an internationally large tent whose past demands a large circumference of consideration. Robert Darden's set Nothing but Love in God's Water is not such a history. It is much more specific in subject but much broader in social, cultural, and religious significance and revelation. Darden notes early on the reluctance of the white, ruling class' to spread "The Good News" among the slaves when this sharing was predicate to their shared Puritan background:

"Because of the widespread opposition to introducing Christianity to slaves continued into the 1800s, it is not surprising that only a few dismissive mentions of original religious music among the slaves survives... As religion has often been employed for social crowd control, so has its denial through limiting exposure. What Christianity offered the slave population was something very powerful, a narrative the slaves could uniquely understand, that of the Jews in Exile. This is a narrative that white, non-slave Christian's cannot effectively make their own much less begin to understand. Not at the depth of the slaves. Darden goes on to say, ..."the slave religion eventually found almost universal acceptance in the South. It was not the same Christianity practiced (or not practiced) by their owners. By the early 1800s, most slaves in the United States were native born, with no direct memories or experiences for Africa or their African religions, which meant that even the opposition to Christianity among slaves was nearly gone. Not that Christianity ever wholly eradicated the many gifts of Africa, of course: "Nevertheless, even as the gods of Africa gave way to the God of Christianity, the African heritage of singing, dancing, spiritual possession, and magic, continued to influence Afro-American spirituals, ring shouts, and folk beliefs. That this was so was evidence of the slaves' ability not only to adapt to new contexts but to do so creatively.

This new slave religion took the best of what the Christian faith offered and discarded the rest. This is an important step however long it took and wherever it took place. Throughout the history of Christianity, the God of the rich, the powerful, the oppressor is not the same God of the poor, the weak, the oppressed. The slave quickly saw through this dichotomy, noting the presence "by definition" of "two different religions and...two different gods." To Jeremiah Wright, "the God of the African diaspora is consistent with the God of the Bible who enters into history on the side of the oppressed...fighting the cause of the slaves and the descendants of slaves..

Denial of this tantamount to the hypocrisy prevalent in white, evangelical Christianity in the early part of this century. This is characterized by the blind clinging to outmoded theology and ill-considered orthodoxy, the ill-provided life support to the white, "True Believer" who, by a very wise friend is defined as, "an ideological chauvinist who clings to and defends a worldview/belief system no matter how bizarre and irrational, and for whom nuance does not exist. A true believer will always place weird principle over the welfare of real people who are invisible to him/her."

It is both in spite of and because of this irrational world belief that Black scared music became a vehicle for the truth, where modern white Christian music became a bromide for a shivering and frightened elite, fearing their reckoning is coming. But this is just the undercurrent to the discussion, the molten history giving rise, through a profound creativity, to a gift that belongs to all of us, but was given, through grace by a relative few. This established, Darden proceeds to explain the history of black sacred music and its value to all.

With this established, Darden begins carefully introducing the sacred (and sacred secular songs of protest) songs that were there at the start. In the beginning, there was "God Down, Moses:"

The song was codified in 1962 as the song of the Contrabands at Fort Monroe sometime before July 1862. Early researchers believed it was composed by this group of escaped. Sheet music was soon after published, titled "Oh! Let My People Go: The Song of the Contrabands," and arranged by Horace Waters. L.C. Lockwood, chaplain of the Contrabands, stated in the sheet music the song was from Virginia, dating from about 1853. The song again was noted in the book of the Fisk Jubilee Singers in 1873, sung to both Ulysses S. Grant and Queen Victoria, but reputed to be much older. The song is mentioned in the writings of both Harriet Tubman and Sojourner Truth and was part of the mystique of the Underground Railroad. The theme is obvious and powerful and the African American Slaves of the 18th and 19th centuries effectively took the theme as their own from the pre-common era Jews (the difference between near myth and recent history facts).

This first volume establishes both the sacred song and sacred protest song while incorporating secular protest songs into the fabric of the African-American experience. The narrative that once belonged to the Jews in bondage and later, in exile, had been completely subsumed by the African-American Slave Population after the American Civil War, Reconstruction, Jim Crow and beyond. White America can claim none of this and should respectfully avoid doing so.

Darden hits his stride in Volume 2, published two years after Volume 1. What voice that was blurred around the edges in Volume 1, comes into stark and brutal focus in Volume 2. Darden fully links the music of a movement with the movement itself. Longer than Volume 1, Volume 2 breaks things down to a succession of events: The Sit -ins; The Freedom Rides; Birmingham Alabama; The March on Washington; Mississippi Freedom Summer...ending with Memphis, Tennessee and the death of an icon.

Darden sums his approach up in a single powerful paragraph:.

..."I aim to emphasize the vitality and importance of {this}music in the African-American ongoing fight for justice and equality in the United States. To me, the fact that these protest spirituals endured and were preserved in an almost apostolic succession from the Civil War to the Civil Rights Movement strongly suggests that they were more than just marching songs. Because of their direct connection to the African-American Church and because of the black church's leadership during the civil rights movement, these songs bore the weight of a mandate from God. The protest spirituals reaffirmed and reinforced the profound statement that God who delivered Moses from Egypt and the American Slaves from bondage in the South was the same God who would free African-Americans in modern day Dixie."

But this is yet to happen.