Squinting painfully into the cruel light, I look up at his shadowed, slobbery face, harshly backlit. Our eyes meet; he revels in his power, my servitude.

The light is unsettling; too bright, by far, for the dark business at hand. My fingers work tirelessly. Visible beneath them, a workspace painful to the glance; brilliant, aching white. Should I look away, bury my gaze instead in the teeming masses before me? They transact ceaselessly, without apology. Harshly lit, the greedy faces are easily identified, yet there is mystery about them.

Shouldn't it be nighttime? Shouldn't we be in a darkened restaurant, or a seamy, ill-lit bar? Underground, hidden, dank. Then, would this dirty work—theirs and mine—begin, somehow, to make sense?

There is never silence. Their constant activity creates an unyielding soundtrack, a sonic ocean of footshuffling, hand-shaking, back-stabbing, the parts seldom distinguishable. When I pause in my work, their sound suddenly jumps forward.

In their clutches, pressed to their ears, always, the cellphones. Some voices hushed, others too loud, disturbing. Half a conversation is revealing: Numbers, negotiations, power, wealth. The dialed-up co-conspirators unseen and unknown—could they be in another building like this one, I wonder, a venue just as unforgiving? And nearby, perhaps, taking it all in, another, unnoticed, like myself? Sitting on a cold, hard bench, removed from the action, yet guilty by association, aiding and abetting?

Latching onto a wandering eye or a fleeting smile, I reach out to them. I cannot talk while I work, but still I try: Here is something just for you, a special offering, please embrace it, remember it. To myself I think: This time, it might be different. But always they pull away, eyes averted, smile dissolved, an unwritten rule having nearly been broken. I wince as my eyes readjust to the searing brightness of my workspace.

If only it were nighttime; if we were just inside that dingy nightclub. Away from this glaring chamber and its toxic air of shared purpose, wouldn't they finally see me? Accept me? Speak to me?

Though they number no more than thirty at any moment, the flow is unending, the supply seemingly infinite. They move across my field of vision, toward an unknown pursuit or away from an unknown pursuer. Occasional stragglers thrash upstream, disrupting the flow, forcing others dangerously close to me. Then I feel light breezes, each bearing a telling scent: Perfume, cologne, smoke, sweat. I inhale and ponder the hidden stories.

I have seen the secret liaisons, the light squeeze, gentle pat, shared glance. Their discreet gestures are undetected by the rest, lost in the commotion. I, alone, watch as they seek solace in one another, and I quickly look away. Other partnerships are less tentative, more threatening. There is no romance save the thrill of undetected crime, the sums large, the details shady. A hand casually cupped over the mouth, an ear close in, both men nodding without expression. Their handshake lingers, and as they walk away they steal sideways glances at one another, scanning for hints of betrayal.

But at night, away from the revealing light, emboldened by drink, they might be less careful, more daring, lovers and conspirators alike. They would sit in pairs at secluded booths, dimly visible through curls of smoke, whispering over their cocktails. And I would be surrounded by others like myself, fortified by their number; at home, finally, in the near darkness. I would watch without shame, fearing no consequences.

Suddenly, an accusing glance in my direction. Lost in my reverie, was I staring? Too loud in my work? I must turn back to my hands, my pupils pinpoints in the glare. If only the punishing light could be somehow be dimmed. Then I would recede into the background, where I long to be. I try to make myself smaller.

Sometimes, at my lowest moments, I can't help but question my own existence. There are simple, incongruous realities: Through my work I am supposed to serve them, but thinking of them distracts me from my work. Unknown to them, I am there for their pleasure, though few take pleasure in what I do. Without them, there would be no need for me, yet they make my job harder, and I am often in their way: close to me their conversations become shrill and resentful.

And the hurtful light! I have worked in hundreds of other places, always in the comfort of darkness, usually with partners, like-minded and accepting. Here, I am alone, exposed, spotlighted, vulnerable; my work just a cheap underscore for the harsh machinations of daytime commerce.

So I wonder: At night, away from this shrill reality, liberated by their unaccustomed surroundings, couldn't they rediscover the joy of their senses? Savoring their food, mindful of each flavorful bite? Sipping their wine thoughtfully, lost in pleasant memories? Swaying gently, instinctively, to the music? Then, slowly becoming aware of their own movements, turning their attention to the stage? Scanning the bandstand, singling out the soloists, applauding the improvisations? Finally, spotting someone vaguely familiar behind the piano?

Confusion would cross their faces, then a shock of recognition. Then, up on their feet, they would applaud the piano solo, my solo, whistling, hollering. On the break, they would ask my name, slap my back, buy me a drink, conversation flowing freely. It could be that simple, that sudden, that joyful: After years of stony silence, we become friends, not just for the night, but for all the days to follow.

And even now, to my surprise, they approach. First one, then many. I prepare for their arrival, recalling all my imagined conversations with them, fearing that with too much to say, I might become dumbstruck. Joy wells up within me, years of pent-up emotion suddenly rushing forward.

But as they draw closer, I can see that they are unsympathetic, even angry, threatening. I seek cover from the tropical foliage surrounding my workspace, frantically clutching a handful of its variegated branches and pulling them in front of me. Their shadows ripple across the brilliant ivories, strobe-like, swallowing up and spitting out the black keys. I am dizzied, nauseated. I can only look away, toward the coming assault.

A tall, tanned middle-aged businessman in a designer suit is the first. His eyes scorch me as he demands, "Where is the bathroom?" I cower, nearly falling to the floor as a branch snaps.

Next, a younger man, casually dressed for lunch or a round of golf. He is wearing headphones, and through them I can hear the violent popping of a drum. He doesn't speak, but his angry eyes tell me I'm seeping through between the snare hits, polluting and defiling his music. At last I matter, but only in the worst way: No longer a nonentity, I am a pest, a nuisance, a blight.

There are so many others. The interrogation is relent-less: Can't you play classical, country, can't you rock out, do something more upbeat, slower, different, better? Each time the tone is accusatory, and I recoil further, eventually forced to cling to my miserable instrument for balance.

Then, the worst: A beaming young mother, lifting her squirming toddler above me so he can stare down, watch at my hands at work. I can see her hurtful words coming; I know exactly what they will be, a torturous command. My only hope is to cut her off by speaking first, sharing my anguished story, its words so long suppressed. I would tell all: the loneliness, the alienation, the degradation. My desperate attempt to find sanctuary in the music, its beauty and complexity an elusive ideal, my pursuit an escape in itself, refuge from the harsh surroundings.

If I could just find those words, wouldn't she under-stand me, pity me? And, mercifully, reconsider her sense-less request for the Charlie Brown song?

But the child's unblinking gaze renders me mute, and his mother's cruel words spill forth. He snorts as my face involuntarily crinkles in the happy Entertainer's smile and my hands launch into the dreaded melody. Squinting painfully into the cruel light, I look up at his shadowed, slobbery face, harshly backlit. Our eyes meet; he revels in his power, my servitude. He squirms some more, and a milky dollop of drool lands on my shoulder. A second globule lands on middle C; it glistens brilliantly until my hand, already in motion, makes its ill-fated landing. As I pull away in horror, phlegmy strands trail from my fingers, a germ-laden bond between me and the cursed piano.

Out of my despair comes a vision, no less chilling: 25 years from now the kid is back, spittle wiped clean, cellphone in hand, marching in lock-step with the others. Some other toddler is leering down at the piano, wriggling against his mother's grip, the Charlie Brown song sounding yet again, sickly sweet. Hearing those notes, somehow familiar, the young executive pauses in mid-stride, causing others to stumble all around him, He turns toward the pianist, itching a vague memory, seeking explanation for a question he can't quite form.

And who will that pianist be? Will I have escaped, finally, to the elusive nightclub, finding comfort at last in its dark corners? Or am I doomed to play out my life, note by note, in the unforgiving light of the lobby? 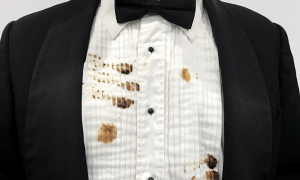 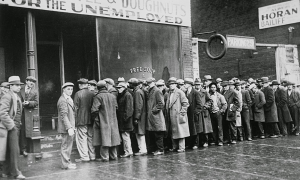 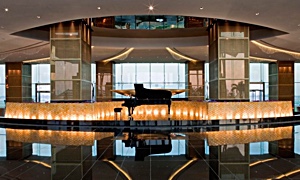 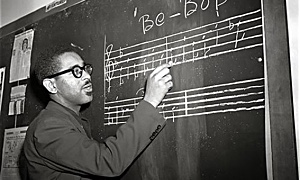