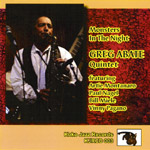 Jazz master and multi-saxophonist Greg Abate, long known as the "prince of bebop," has thirteen previous recordings as a leader to his credit. Harnessing his physical style of play and combining it with his versatility on the saxophones and flute, he has made one hair-raising and jaw-dropping album with Monsters In The Night, whose nine tracks are dedicated to the monsters we've all come to love and fear.

Given this collection of original compositions with titles like "Dracula" and "Frankenstein," I frankly did not know what to expect. But after only one listen, I was shaken by just how good the disc really is. Abate is the major player, not only on alto (with which he is primarily associated), but also a mean tenor and flute as well. An unselfish leader, Abate provides enormous space in his arrangements for the members of his quintet to make their mark.

The title track, "Monsters In The Night" tones down the music in a slower, melodic fashion with a solid solo performance by trombonist Montanaro, who gives way to Abate on screaming tenor. Watch out for "Dr. Jekyll/Mr. Hyde," or you may fall into their embrace on this super swinging number, which moves all over. The leader makes another passionate alto expression, but pianist Nagel makes one hell of a scary impression.

When one thinks of the "Bride of Frankenstein," the picture of a gentler monster comes to mind—which Abate confirms with his flute foray on this sweet harmonic piece. The program rounds out with the very boppish "Transylvania 6-5000," a full ten minutes of punch; "Pentagram, The Wolfman"; and the Latin-shaded percussive piece "Igor's Revenge," where Abate demonstrates his versitility on alto and flute.

Without reservation, I came to the scary conclusion that Monsters is one of the best pure jazz albums I've had the pleasure of listening to. Energizing, harmonious, melodic and full of fire, with enough electric sparks to bring the Frankenstein creature back to life. One blood-curling monster performance by Abate and his graveyard crew.