BY DAN BILAWSKY
January 1, 2013
Sign in to view read count 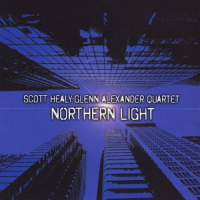 In today's fast-paced world, there's a tendency to try to write, record and release music in quick succession, but that's not always the best method. Sometimes, recorded music sounds best when it's had the chance to marinate and soak up the diverse flavors of time. Such is the case with the unintentional decades-long gap between the recording and release of this album.

Pianist Scott Healy and guitarist Glenn Alexander recorded Northern Light in 1991, when they were gigging with the flexible rhythm team of bassist Kermit Driscoll and drummer Jeff Hirshfield, but it never made its way into the world; life, and all of its twists and turns happened for both men and this music was quickly put aside. Healy joined the house band for Late Night with Conan O'Brien as that show took flight and Alexander began to focus on his own projects. More than two decades later, the music is finally seeing the light of day and both men have the next generation of musicians to thank for it, with Alexander deciding to play it for his students at Sarah Lawrence College and their enthusiasm getting the ball rolling.

While the album is short by today's standards, clocking in under forty minutes, it wins out with quality and diversity. The album gets underway with the loose floating "Spiral," but takes a fusion-tinged turn on "Christmas Day," where Alexander's sound may appear a bit dated, but his ideas defy any time, place or style. "November" is a revelation of beauty; a promise that proves to be the high point of the album, but the second half of the program still has plenty to offer. "To The Point" rides on the possibility of danger, though it remains fairly sedate and never makes good on that promise, while "Chimes" slowly stirs itself around before taking on a light, but firm feeling. That penultimate performance proves to be a fine showcase for both co-leaders.

It's a bit of a cliché to say that a long delayed release was worth the wait, but it works with this one. Northern Light is music deserving of an audience and now, decades after it was recorded, it will finally have one.